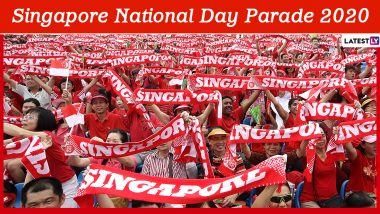 Singapore declared independence from Britain in August 1963. It joined the Federation of Malaysia in September 1963 after the 1962 Merger Referendum of Singapore. The country left the federation two years later and gained its own sovereignty on August 9th 1965 when Yusof bin Ishak was sworn in as the first President of Singapore. The country celebrated its first National Day as an independent nation in 1966, one year after Singapore's separation from Malaysia on 9 August 1965.

However, celebrations have been curtailed this year due to COVID-19 pandemic. There will be F-15SG fighter jet aerial display, the Red Lions free-fall jump, and mobile column at different locations around the island. These displays will also pay special tribute to front-line workers against COVID-19. It will begin with Prime Minister's National Day Message and a parade at the Padang reviewed by the President.

This will be accompanied by flag-raising ceremonies across Singapore during the singing of the National Anthem. Vessels from the Singapore Navy and various public agencies will participate in a maritime sail-past. Various virtual and home activities, such as an NDP-themed workout and a family cooking activity will also be held. Other than which, fun packs will be given to every Singaporean and permanent resident household. There will be an evening show at The Star Performing Arts Centre in Buona Vista that features films and performances by Singaporeans. This will coordinate in a fireworks display at more than 10 different sites across the country.

Another event will be virtual choir performance compiled from the efforts of several thousand Singaporeans who submitted video clips highlighting this year’s National Day Parade (NDP) evening show on Aug 9. The choral performance of 'We Are Singapore' will follow a series of short films and interviews profiling 31 Singaporeans. These clips will be interspersed with performances by local artistes.

(The above story first appeared on LatestLY on Aug 04, 2020 07:14 PM IST. For more news and updates on politics, world, sports, entertainment and lifestyle, log on to our website latestly.com).