Single Ladies, Don’t Despair on Valentine’s Day 2019! From Rochester to Darcy, Here Are Hot Literary Heroes to Lust Over 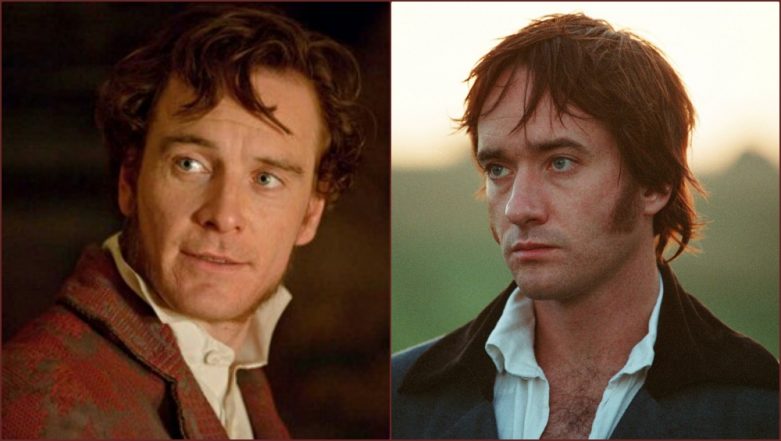 It’s Valentine’s Day 2019. Honestly, do you really need this intimation from us? Nope. Look around you, everyone is gripped by Valentine’s Day fever. Markets are flooded with greeting cards, flower bouquets and soft toys. People are buying roses and heart-shaped balloons for their loved ones. And if you’re single and feeling depressed by this ‘love is in the air’ atmosphere, it’s totally okay. It’s not your fault. But all said and done, I cannot let you beautiful single ladies aka my virtual gal pals feel miserable the entire day. It’s time to celebrate Valentine’s Day with the most desirable men alive. I am taking you on a joyride where you are going to meet the hottest characters ever in books (yes, books) who will set your heart on fire. Happy Galentine's as well as Valentine’s Day!!

Does not boast of a handsome face. Has a crazy wife locked up in his mansion’s attic. He is also moody, arrogant, cynical and jaded. That’s Charlotte Brontë’s hero (read: anti-hero) from Jane Eyre – Edward Rochester. Despite a long list of shortcomings, Mr Rochester sweeps the novel’s young heroine, Jane (as well as readers) off her feet. The brooding, difficult and secretive master of Thornfield Hall is not your ideal man. In fact, this Byronic hero is far from perfect. But despite all odds, you cannot stop from falling in love with him. Watch this "There Is No Debt" clip from 2011 movie Jane Eyre based on Bronte’s novel. It starred the very talented Michael Fassbender as Mr Rochester and wonderful Mia Wasikowska as Jane.

Here's the clip from Jane Eyre:

Is it just me or has everyone been in search of their Mr Darcy (full name: Fitzwilliam Darcy)? The hero of Jane Austen’s Pride and Prejudice is your quintessential archetype of the aloof romantic hero. His pride makes the novel’s protagonist, Elizabeth Bennet outrightly reject his marriage proposal, and she declares him to be ‘the last man in the world’ she could ever be prevailed upon to marry! Ouch. Despite his pride and her prejudice, they continue to be drawn to each other. Jane Austen’s most favourite work has been adapted on many occasions, and you can relive Elizabeth and Mr Darcy’s chemistry with this short clip from 2005-film Pride and Prejudice. It starred Keira Knightley Keira Knightley as Elizabeth Bennet and Matthew Macfadyen as Mr Fitzwilliam Darcy.

Here's a clip from Pride and Prejudice:

A man with a secret identity. Emma Orczy’s hero from her novel The Scarlet Pimpernel established the "hero with a secret identity" trope into popular culture. Using the French Revolution as the backdrop of her fictional historical series, Orczy tells the story of Scarlet Pimpernel, a hero who saves royals who are to be guillotined. Under that heroic mask is his alter ego Sir Percy Blakeney who loves flaunting his wealth and making fashion statements. He has hidden his secret identity from his wife and romantic interest, Marguerite Blakeney. Does this plot remind anyone of Christian Bale and Christopher Nolan’s Batman Begins?

Robbie and Cecilia have grown up together and fall in love. He is a bright, ambitious and attractive male protagonist of Ian McEwan’s 2001 novel, Atonement. Robbie passionately loves Cecilia, but their love story is cut-short by Cecilia’s younger sister, Briony. A half-innocent mistake that destroyed the lead pair’s lives and turned into ashes. The novel was adapted into a BAFTA and Academy Award-winning film in 2007 of the same title, starring Saoirse Ronan (Briony), James McAvoy (Robbie), and Keira Knightley (Cecilia).

Watch a clip from the movie Atonement here:

Being a very committed person to my literary heroes, this is my list of just four most desirable men from the world of books. Few who failed to make to the final cut by a whisker are Noah Calhoun (Notebook), Landon Carter (A Walk to Remember), Sherlock Holmes and Heathcliff (Wuthering Heights). I am having a great Valentine’s Day reading about my favourite heroes and I hope you all also have a great day and enjoy this mushy day of love.