St Thomas Day 2021: From Date, History and Significance, Here's Everything You Need To Know About This Day 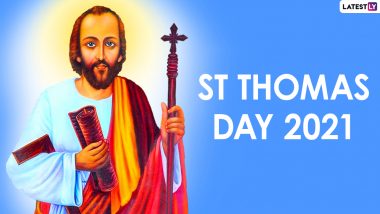 Each year, St. Thomas Day is observed on July 3 across the world. The day is quite important in the Christian calendar as it celebrates saint Thomas who is regarded as one of the twelve Apostles in accordance with the New Testament. The day is observed by Christians across the globe to pay homage to Saint Thomas. While most Christians celebrate it on this particular date, the dates still vary in most parts of the world amid different sects. Historically, St Thomas Day was widely observed on December 21 dating back to the day the  Feast of St. Thomas the Apostle was established in the twelfth century.  However, In 1969 the date was moved by the Roman Catholic church to July 3.

Though the date has since been moved, most Anglicans, keeping up with the traditions of the past,  still celebrate the day on Winter solstice (December 21). The Greek Orthodox Church celebrates the saint’s feast on October 6. From 'Why Is St Thomas Day Celebrated' to 'Why Was Thomas Called Didymus?' Everything You Want to Know About Day Dedicated to the Apostle

Initially reluctant to accept the existence and subsequent resurrection of Jesus Christ, Thomas who earned the title ‘Doubting Thomas’ eventually became one of the twelve apostles of Jesus Christ. While at first, he questioned the tale behind the resurrection of Jesus, he later became his staunch disciple after witnessing the crucifixion marks of the body of Christ. Upon discovering his existence, as an ardent believer,  he went on to spread the gospel of Jesus christ travelling as far as the east that led him to India. It’s widely believed that he established a Christian neighbourhood in the southwestern region of the Malabar, which now spans half of Kerala. Presently, that particular region is inhabited by an enormous Christian populace. It's also said, that Thomas baptised three Kings who later became India’s first bishops.

Saint Thomas is also believed to have an altruistic streak since there's a tale about an Indian king who commissioned Thomas to construct a palace, instead he distributed the cash amongst the poor. In England, people comprised of kids, the old and the poor still go door-to-door- in expectation of money. In other European countries, they usually rise early and show up to work or school at an early hour.

(The above story first appeared on LatestLY on Jul 03, 2021 02:00 PM IST. For more news and updates on politics, world, sports, entertainment and lifestyle, log on to our website latestly.com).