World Elephant Day 2020 Date And Significance: Know The History of the Day That Celebrates the Magnificent Creatures 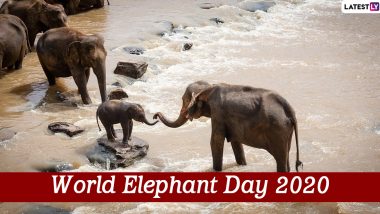 World Elephant Day is observed on August 12 annually to create awareness about the jumbos. The day is to let you experience elephants in their sustainable environments where they thrive under care and protection. On World Elephant Day ensure better care of captive and wild elephants alike. The elephant is loved, revered and respected by people of different cultures and traditions around the world. Yet the magnificent creature is exploited around the world, as humans use it for their selfish desires. From poaching to being kept under human care, elephants despite their tremendous size are not allowed to be on their own. When Elephants Saved Humans! These Moving Instances of Jumbos’ Bravery Rescuing People From Tragic Situations Will Inspire You to Become Better Person! (Watch Videos)

World Elephant Day came into existence in 2011 by the initiative of two Canadian filmmakers Patricia Sims & Michael Clark of Canazwest Pictures and also Sivaporn Dardarananda (the Secretary-General of Thailand’s Elephant Reintroduction Foundation). World Elephant Day 2020 was launched on August 12, 2012, to bring attention to the plight of Asian and African elephants. Some of the problems which have affected elephants are increased in cases of poaching, habitat loss, human-elephant conflict and mistreatment in captivity. Both African and Asian elephants suffer the same issues. Adorable Pics & Videos of Elephants With Their Babies Will Leave You Wondering 'How Can Someone Ever Harm Them?'

(The above story first appeared on LatestLY on Aug 09, 2020 02:34 PM IST. For more news and updates on politics, world, sports, entertainment and lifestyle, log on to our website latestly.com).