March 30 is celebrated as World Idli Day to hail this beloved snack. 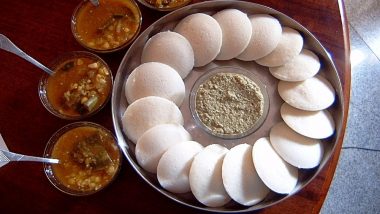 There's no better (and nutritious) way to begin the day than with a steaming plate of idli. The breakfast dish made of the fermented batter of lentils and rice was invented centuries ago. Idli has not only stood the test of time but also emerged as one of the healthiest, most versatile snacks today. A survey on breakfast habits revealed that Chennai the best breakfast nutrient profile in the country. It's no coincidence that idli and dosas are the most widely-consumed breakfast staples in the city. Idli is a low-calorie food with little or no saturated fat and cholesterol. It has proteins from lentils, carbohydrates from rice and micronutrients such as potassium, magnesium, calcium, folate and vitamin A. On World Idli Day 2019, we give you seven reasons why these South Indian snacks are the healthiest.

Idli for weight loss is a great idea if you don't want to compromise on taste. It's delicious and filling at the same time. Make of rice, urad daal and salt, idli requires no form of fat for cooking. A single idli is just 39 calories and a plate of idlis sans the accompaniments is just under 100 calories. But if you want to up its nutritional profile, you can always reduce the salt in the batter and replace rice with brown or red rice.  Twitter Hails the King of Breakfast, Shashi Tharoor Calls Idli 'Greatest of All Food.'

Our unhealthy dependence on processed foods and poor lifestyle choices have wreaked havoc on our digestive health. Since idli is a fermented food, it eases some of the burden on the stomach during digestion. The presence of lactic in idli also helps gut health, since the acid restores the pH balance in the intestines.

Urad dal or split black gram used in idlis is a high-fibre food, which contains both soluble and insoluble fibres. Idli serves as a great snack for those who have less-than-satisfactory bowel movements and digestive issues. The dietary fibre in the dish helps in the fast movement of stools, and rids you of bloating, constipation and cramps. Ahead of World Idli Day on March 30, Study Reveals Indians Love to Have Idli As Breakfast.

Idli is a low-sodium food with no cholesterol. Naturally, it's good for the cardiovascular system. Idlis also contain a healthy amount of magnesium and potassium, which are great for the heart. These minerals improve blood circulation and maintain the health of blood vessels.

You need carbohydrates for energy. Since idlis are made of rice, a great source of complex carbs, they are a great breakfast option for people who are on the go! A single idli can provide you with eight grams of carbohydrates. Plus, urad dal in the idli is rich in iron, which helps make red blood cells. These cells then transport oxygen to the rest of the body, providing the body with energy.

March 30 is celebrated as World Idli Day to hail this beloved snack. With as little a pat of butter or chutney, you can relish these fluffy rice cakes at any time of the day. So grab yourself a steaming plate of idlis today!

(The above story first appeared on LatestLY on Mar 30, 2019 09:13 AM IST. For more news and updates on politics, world, sports, entertainment and lifestyle, log on to our website latestly.com).