Famous culinary director of the restaurant The Bombay Canteen -- Indian-origin chef Floyd Cardoz -- died on Wednesday in New Jersey, who was tested positive with coronavirus recently. The information was shared by his company Hunger Inc., which owns that The Bombay Canteen. 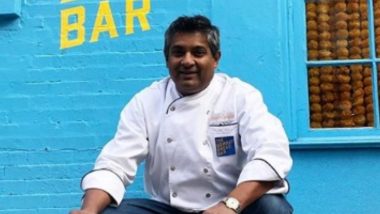 Mumbai, March 25: Culinary director of the restaurant The Bombay Canteen -- Indian-origin chef Floyd Cardoz -- died on Wednesday in New Jersey. Reports confirmed that he was tested positive for coronavirus recently. The information was shared by his company Hunger Inc., which owns The Bombay Canteen.

Issuing a statement, Hunger Inc. said, as quoted by The Hindustan Times, "Mr. Cardoz (59), currently admitted to a hospital in New York in the U.S., tested positive for COVID-19 on March 18, 2020. As a precautionary measure, we have informed the Health Department in Mumbai about the same. We are also reaching out personally to people who have interacted with him during his visit to India, so they can take necessary medical advice should they indicate any symptoms (fever, cough, shortness of breath) and/ or self-quarantine. Mr. Cardoz flew back to New York from Mumbai via Frankfurt on March 8, 2020." Coronavirus Outbreak: Three Indians Dead Outside India, One Among Them Committed Suicide in Sweden After Being Diagonsed With COVID-19, Says Report.

It is to be known that Cardoz was born in Mumbai and became a biochemist. But, later, he discovered his passion for cooking, he went to culinary school in India and Switzerland and later moved to New York City. Earlier on March 23, the Union government on Monday informed that three Indians had died outside India. The Government informed that the casualties were reported from Iran, Egypt and Sweden.

The Union government said that the person from Sweden suicide after he was diagnosed with coronavirus. The Indian government had also stated that a total of 276 cases of Indians infected with the deadly virus have been reported from foreign country, among them 255 are from Iran's central city of Qom. Also, 12 cases of Indians infected with COVID-19 have arrived form UAE, while five from Italy. Hong Kong, Kuwait, Rwanda and Sri Lanka have one case each.

(The above story first appeared on LatestLY on Mar 25, 2020 07:09 PM IST. For more news and updates on politics, world, sports, entertainment and lifestyle, log on to our website latestly.com).