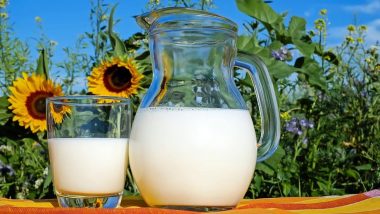 National Milk Day 2020 will be celebrated in the United States of America on January 11. The day is commemorated to honour the time when milk deliveries first began in glass bottles in the year 1878. The United States and Australia are the top two nations in the world to export milk and products related to it. On occasion of National Milk Day 2020, we will share some fun facts about milk. Does Drinking Milk Everyday Cause Weight Gain? All That You Should Know About The Calcium Rich Fluid.

Milk is said to be a necessary inclusion in daily diet as it is rich in vitamins and minerals. The presence of calcium in the milk is high in quantity compared to other food items. Therefore, milk helps in the development of strong bones and teeth. Interestingly, during the Middle Ages, milk was referred to as white liquor as alcoholic beverages were considered more reliable than water at that time. In 1863, Louis Pasteur, French chemist introduced the method of pasteurisation used for killing harmful bacteria in the milk. Keep scrolling for more interesting and fun facts about milk. National Milk Day: From Stronger Bones to Weight Loss, Here Are the Health Benefits of Cow Milk.

1. Milk has been chosen as an official state beverage by 21 states in the United States of America.

2. As per the research by Newcastle University, cows who get called by their name by farmers, yield 258 litres higher milk than those who did not.

3. According to a study published in the journal of the American Chemical Society (ACS), during ancient Russian times, milk was avoided from getting sour by keeping frog in the bucket of milk.

4. Historically, adding milk in the cup after the tea is a sign of wealth.

5. Galalith, a manufacturer company in the United Kingdom, use milk to create their synthetic plastic product, which is odourless, biodegradable, antistatic, insoluble in water and virtually non-flammable.

6. There is a fine of upto 300 US$ or imprisonment upto 90 days in Pennsylvania to use milk crates for anything other than milk.

7. Surprisingly most condoms have milk protein in them. Milk protein is used in the manufacturing of latex.

US dairy farms roughly produce 21 billion gallons of milk annually. The average American consumes almost 25 gallons of milk a year.  National Milk Day can be enjoyed by trying out different dairy products which are good for health. Be it any day, milk shouldn't be skipped as it is very essential for a healthy body.

(The above story first appeared on LatestLY on Jan 11, 2020 10:42 AM IST. For more news and updates on politics, world, sports, entertainment and lifestyle, log on to our website latestly.com).