UK pharmaceutical company AstraZeneca on Tuesday informed that it had "voluntarily paused" a randomized clinical trial of its coronavirus vaccine. The study was paused after a volunteer developed an unexplained illness. 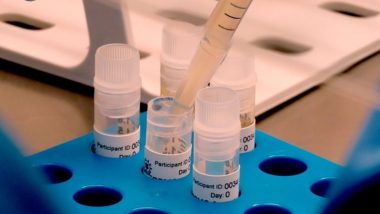 London, September 9: UK pharmaceutical company AstraZeneca on Tuesday informed that it had "voluntarily paused" a randomized clinical trial of its coronavirus vaccine. The study was paused after a volunteer developed an unexplained illness. AstraZeneca, which is developing the vaccine alongside Oxford University, called it a ‘routine pause’ in the case of ‘an unexplained illness’.

The company informed that the pause was part of a routine exercise which has to happen whenever there is a potentially unexplained illness in one of the trials, while it is investigated. It added that in large trials, illnesses will sometimes happen by chance but must be reviewed independently.

"We are working to expedite the review of the single event to minimise any potential impact on the trial timeline," the spokesperson of the company added. There is no clarity till now on the details about the patient, the nature and severity of their illness. AstraZeneca is one of nine companies currently in late-stage Phase 3 trials for their vaccine candidates. Oxford-AstraZeneca COVID-19 Vaccine Trial Put on Temporary Hold After One 'Potentially Unexplained Illness'

WHO, spokeswoman Margaret Harris last week informed that World Health Organization does not expect widespread vaccinations against COVID-19 until the middle of next year. She stressed the importance of rigorous checks on their effectiveness and safety.

"None of the candidate vaccines in advanced clinical trials so far has demonstrated a "clear signal" of efficacy at the level of at least 50 percent, said WHO spokesperson.

Russia granted regulatory approval to a coronavirus vaccine in August after less than two months of human testing, prompting some Western experts to question its safety and efficacy.

In another news, Covishield, a potential vaccine against coronavirus (COVID-19) infection, is facing ire of Muslim and Christian clerics in Australia over the use of fetal cells in its development. The vaccine is developed by Oxford University and AstraZeneca.

On Monday, US President Donald Trump hinted that US could approve a coronavirus vaccine in October, ahead of the November election. At a news conference, he was quoted saying, "This could’ve taken two or three years, and instead it’s going to be -- going to be done in a very short period of time."

(The above story first appeared on LatestLY on Sep 09, 2020 09:18 AM IST. For more news and updates on politics, world, sports, entertainment and lifestyle, log on to our website latestly.com).