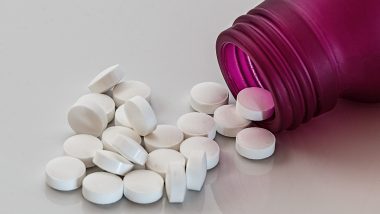 Washington DC, August 9: With the use of molecular modelling, two medications that have been known for a long time can be used to fight SARS-CoV-2, found a team of chemists from HSE University and the Zelinsky Institute of Organic Chemistry.

These are disulfiram, which is used to treat alcoholism, and neratinib, an experimental drug being used to treat breast cancer. The paper about the discovery has been published online in the 4th issue of Mendeleev Communications journal. Bharat Biotech Vice-President Dr V.K. Srinivas Takes First Shot Of COVID-19 Vaccine? COVAXIN Developer Refutes Claim, Here's a Fact Check.

The structural elements of the virus that are less subject to mutation during its evolution should be chosen as a target for the potential treatment. Otherwise, a medication effective against one strain would no longer be effective against another.

The best candidates for this are conservative proteins, such as the SARS-CoV-2 virus main protease M pro. In addition to being resistant to mutations, M pro plays a major role in coronavirus replication, which means that its inhibition (blocking its function) is able to slow down or even completely stop its reproduction inside the body.

Usually, the process of docking, as with a port dock and a ship entering it, is used for molecular modelling in simple cases. Two molecules participate in docking. One is called a 'ligand' (here, it is a medicine), and the other one is 'receptor' (or active site) of the target protein, such as Mpro, which can be used to 'dock'.

An effective drug docks with the active site, by covalent links, which makes the enzyme dysfunctional or destroys it. But classical docking does not work in SARS-CoV-2.no overcome this problem, chemists from HSE University and the Zelinsky Institute decided to use 'on-top docking', which they came up with shortly before the pandemic.n'We decided not to focus on the previously described active site, but to investigate the whole surface of M pro-protein with many medications, hoping that the big calculation powers would return useful "dockings",' - said Igor Svitanko, the author of the article, Professor at the HSE Joint Department of Organic Chemistry with the RAS Zelinsky Institute of Organic Chemistry.

The researchers used the spatial model of SARS-CoV-2 Mpro created in January 2020 from PDB database (ID 6LU7). The potential drugs were taken from the database of medications approved by the United States Food and Drug Administration (FDA). The research team's own algorithms were used for modelling.nThe modelling data demonstrated that sulphur-containing drugs show unusually high ligand efficiency at the active centre of SARS-CoV-2 main protease Mpro, but only disulfiram 4 retains stable interactions.nToday, it is most commonly used for treating alcoholism. Disulfiram fights SARS-CoV-2 in two ways.

First, as previously demonstrated in vitro with SARS and MERS coronaviruses, it is a covalent inhibitor. In addition, it fights COVID-19 symptoms such as the significant decrease in reduced glutathione, which is an important antioxidant. This deficiency may lead to severe manifestations of the disease.nIn addition to disulfiram, the Russian chemists were the first to predict the potential efficiency of neratinib, an irreversible tyrosine kinase inhibitor, against SARS-CoV-2.

Just recently, in2017, FDA approved neratinib as an adjuvant treatment of breast cancer. Modelling has shown that both potential inhibitors of the main coronavirus protease (M pro) are, presumably, covalent. For example, disulfiram can probably block the M pro enzymatic activity by thiol-disulfide exchange reaction, while neratinib binding suggests the possibility of covalent interaction similarly to covalent peptide inhibitors.

The tests that were performed on July 27, 2020 at Reaction Biology Corp., a certified laboratory in the U.S., demonstrated that disulfiram really inhibits M pro in 100 nm concentration, which confirmed the results of the modelling. Unfortunately, the second substance - neratinib - demonstrated activity on M pro, but it was insufficient for clinical use.

Meanwhile, the main achievement is the demonstration that the 'on-top docking' approach is working and returns quite realistic and controllable results. The team's plans for late 2020 and 2021 include molecular modelling of treatments for diseases that have demonstrated their harmfulness but have not yet spread over the world.