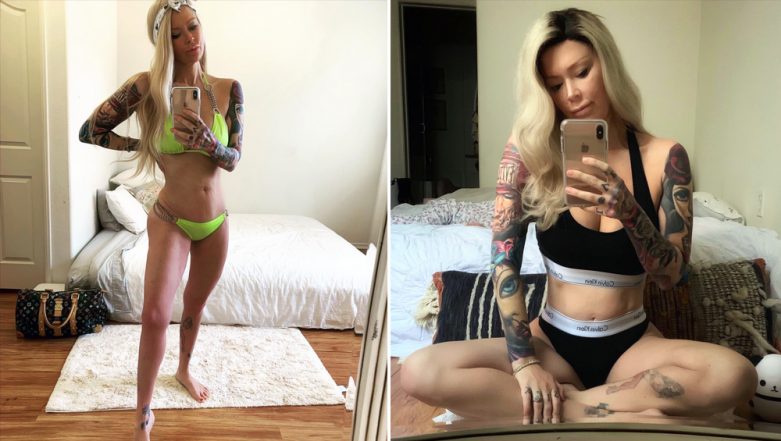 Keto diet has received both praises and its fair share flak from the many fitness enthusiasts and experts. However, the Keto controversy on whether it is actually healthy or not, doesn't seem to end. The American entrepreneur, webcam model and former XXX pornographic film actress, Jenna Jameson has been a great advocate of the keto diet and keeps sharing pictures of her weight loss journey on Instagram praising how keto helped her get back into the shape. The very famous and sexy ex pornstarJenna recently posted a picture of herself in a neon yellow bikini looking sizzling hot showing off her post-baby body 10 months after she got on Keto diet to shed pounds. Her picture is proof that the Ketogenic diet did help her lose a lot of weight. The entrepreneur who has many XXX sex videos to her name, also urged her followers to get on the high-fat, low carb diet. She called the keto lifestyle, "easy" and "sustainable" and also called out the people trashing the diet. Her caption read- "Keto has a lot of critics, but always look behind their anger towards this way of life. There is always something for them to gain by trashing it. We all need to celebrate anyone’s effort to get healthy! Reading all of your dms describing your pounds falling off is the highlight of my days... so keep it up and stay focused... bikinis for everyone"

Take a look at the picture of the former adult star flaunting her post-baby weight loss via the Keto diet.

It is said that she has been an ardent supporter of the ketogenic diet due to the noticeable results she has achieved since she began the diet in March. She claims to have lost more than 80 lbs and also says that she first tried it as a last-ditch effort to lose the baby weight. She gave birth to her daughter Batel Lu in April 2017 however was stuck with the baby fat after that, however, she soon got on the ketogenic diet that gave her the desired result.

There has been a study that says the Ketogenic diet could increase the risk for type 2 diabetes. In the past few years, it quickly skyrocketed as the new weight loss diet that gives you easy fat burn without compromising on that fat you intake. The diet includes a low or no carb intake and a high amount of fat to be consumed. The idea is to help your body reach the ketosis stage wherein your body stops using carbs as fuel and instead burns fat. This, in turn, makes you lose weight very quickly. However, is it actually healthy? Many experts have warned against the diet calling it a scam that only gives you temporary results and long-term health issues. Recently, a Top American Doctor Slammed Ketogenic Diet, saying 'Do Keto Only If Weight Loss Is More Important Than Your Life.'

Ketogenic Diet also called the Keto diet was initially crafted for the patients of epilepsy and was used as a method of treatment. However, the popularity of the Keto Diet seems to only increase with every passing day.