Missing Tooth Grows Inside Testicles of a Teenager! Here’s More About the Rare Teratoma Tumour 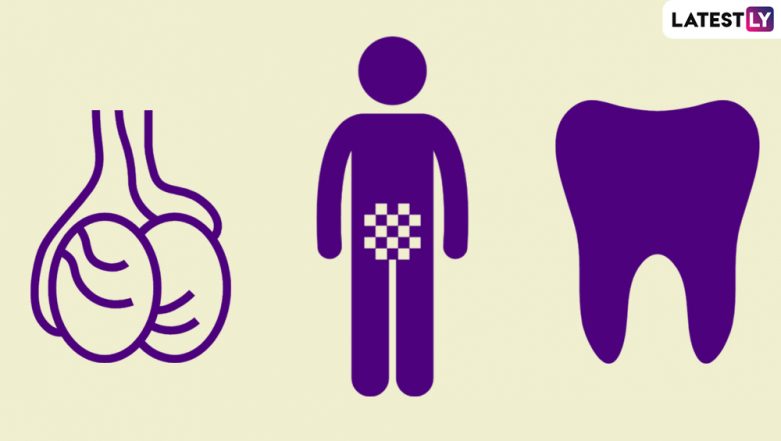 Tooth grows inside the testicles (Photo Credits: The Noun Project and File Photo)

In an extremely strange and rare medical case, a teenage boy's missing tooth was found growing in his testicles instead of his mouth. There was a gap for the missing tooth in his mouth at the seventh place in the upper jaw also known as the second molar. The doctors have found it to be a unique case as they had earlier feared that the boy probably has testicular cancer and carried out surgery to remove the "worrying lump" when they found out that it was, in fact, a tooth growing in his testicles, reported The Sun. The surgery was carried out at Morozov Children's Hospital in Moscow and the doctors said to the esteemed portal that it was a very rare case of "teratoma tumour originating before birth due to a stem cell failure" that caused the tooth had grown inside of one of his testicles instead of his mouth. However, on the brighter side, the kid is now said to be in good health after the successful surgery and he will have good reproductive health when he grows up. Man With 35 Kg Testicles Undergoes Life-Saving Surgery, Finally Gets To Have Sex With Wife After 7 Years.

What is Teratoma Tumour?

A kind of tumour, Teratomas are different because of their composition. "Teratoma" is Greek for "monstrous tumour" and such tumours are usually made up of hair, teeth, bone, neurons, and even eyes' tissues which means they are usually very different than other tumours. The tumours are usually found in the ovaries in women and the testicles in men and can be benign or malignant. The symptoms may make it seem like a usual lump depending on the location of the tumour. Symptoms vary depending on the location. A painful lump or swelling may be apparent. Sometimes babies have a mass that can be seen on an ultrasound before birth and the treatment often involves surgical removal of the lump. Teratoma may sometime be is malignant meaning cancerous which may require chemotherapy or radiation. The most common form of teratoma is a dermoid cyst of the ovary,  containing epidermis, hair follicles, and sebaceous glands. It is very important to immediately visit a medic if you find any kind of painful, non-painful lump in your testicles.

"Dental science knows examples when teeth grew inside the lung. But a tooth growing inside a testicle is a truly unique case," medics handling the case said in a statement obtained by the Metro.