National Fibromyalgia Awareness Day 2022 Date & Significance: What Is Fibrositis? From Symptoms to Diagnosis, Everything You Need To Know

Every year, National Fibromyalgia Awareness Day is observed on May 12. The day aims at driving attention to fibromyalgia, which has affected many people over the centuries. It also aim at supporting and furthering the research into eventually finding a cure. 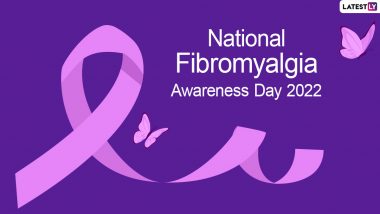 Every year, National Fibromyalgia Awareness Day is observed on May 12. The day aims at driving attention to fibromyalgia, which has affected many people over the centuries. It also aims at supporting and furthering the research into eventually finding a cure. Fibromyalgia or fibromyalgia syndrome is a condition that causes pain all over the body and other symptoms, such as extreme tiredness or sleep, mood or memory problems. Fibromyalgia affects women more than men. The pain, extreme fatigue and lack of sleep due to this condition can be so extreme that they might affect the ability to perform daily tasks. People with fibromyalgia often wake up tired after sleeping, even if they have been sleeping for a long time. Sleep is often disrupted and many patients also experience sleep disorders such as sleep apnea and restless legs syndrome.

Fibromyalgia can be caused by issues with the nerves and pain signals in the brain. Fibromyalgia has been compared to arthritis as it causes pain and fatigue, but unlike arthritis, fibromyalgia does not cause redness and swelling or damage to the joints. This disease can also cause insomnia and the frustration of dealing with this problem can lead to depression and anxiety.

Doctors and researchers have not yet been able to find out the reason for its occurrence. However, some factors are known to be the cause of fibromyalgia. Fibromyalgia is believed to be caused or worsened by other diseases that may have been affected previously. It is often genetic. However, researchers have not yet been able to identify the gene. Apart from this, other factors also include physical or emotional trauma. This condition has also been linked to Post Traumatic Stress Syndrome.

To diagnose fibromyalgia, the doctor may conduct CBC, Erythrocyte sedimentation rate test, Cyclic citrullinated peptide test, Arthritic factor test and Thyroid function test. For the treatment of this disease, the goal of the doctor is to provide relief from the pain first. They may give pain relievers, antidepressants & antileisure drugs. Apart from this, alternative treatments include therapy, acupuncture, yoga, meditation, regular exercise, massage, getting enough sleep at night, etc. Apart from this, one must stay away from smoking and eat foods that reduce inflammation in the body and aggravate the pain.

(The above story first appeared on LatestLY on May 12, 2022 08:02 AM IST. For more news and updates on politics, world, sports, entertainment and lifestyle, log on to our website latestly.com).