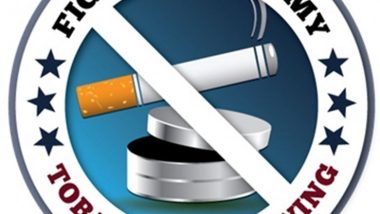 New Delhi, May 31: As the world has changed following the coronavirus pandemic, so has the tobacco consumption behaviour. It is interesting to know, especially on World No-Tobacco Day on Sunday, that 37 per cent of people in India considered lockdown as an opportunity to quit smoking.

In a survey conducted by Indus Health Plus, a preventive healthcare company headquartered in Pune, it was found that 37 per cent of the respondents mentioned that lockdown is a good opportunity to quit smoking, while 42 per cent said that it helped them to reduce consumption. World No-Tobacco Day 2020 Quotes, Images & HD Wallpapers: WhatsApp Stickers, Messages and SMS to Motivate People to Quit Smoking and Chewing Tobacco.

It was a three-week consumer survey to understand the smoking behaviour and patterns of the people during the lockdown. Out of the total respondents, 39 per cent were females and 61 per cent males between the age group of 30-45 years. The sample size of the survey was 837 and the time-frame was May 8 to May 29.

The respondents of the survey were from metros along with tier-II cities of Maharashtra, Karnataka and Madhya Pradesh.

Speaking to IANS, Dr Sanyam Gupta, Radiology Resident at Medanta hospital, said, "Lockdown is a boon in disguise for smokers because it has given them an opportunity to quit smoking and switch to healthy habits to fight their cravings. Smoking has become a style statement among the youth. It has negative impact on respiratory, cardiac and overall health. I have observed that during lockdown, people have opted for other forms of stimulation, such as yoga and exercises."

Dr Gupta said: "Those who have been facing withdrawal symptoms, they are taking help of nicotine gums and other medically prescribed drugs. If a person quits smoking for more than a month, his/her chances of leaving it forever can increase significantly."

"Tobacco consumption has certainly come down in this lockdown. We have seen patients mentally relaxed much more in the lockdown, decreasing their stress levels and also decreasing their tobacco cravings. But the ones who were tobacco dependent have suffered withdrawal symptom, causing increase in their irritability." World No Tobacco Day 2020 Date And Theme: Know The Significance of the Day That Encourages People to Quit Smoking.

Amol Naikawadi, Preventive Healthcare Specialist at a company that conducted the survey, said: "We have observed a significant change in people's tobacco consumption pattern during this lockdown. Moreover, lockdown has given an opportunity to people to quit smoking and live a healthy life. We hope post lockdown, people will continue the pattern of modified habits. Besides, it is imperative people realized the value of prevention to improve their health and acknowledge the harmful effects of smoking."

(The above story first appeared on LatestLY on May 31, 2020 04:29 PM IST. For more news and updates on politics, world, sports, entertainment and lifestyle, log on to our website latestly.com).