World No Tobacco Day 2020 Date And Theme: Know The Significance of the Day That Encourages People to Quit Smoking

Tobacco kills more than 8 million people each year. More than 7 million of those deaths are the result of direct tobacco use while around 1.2 million are the result of non-smokers being exposed to second-hand smoke. 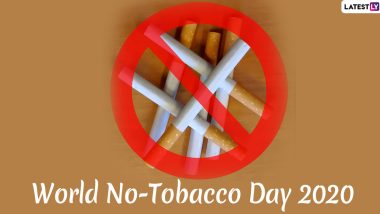 There are nearly 1.337 billion tobacco users in the world which poses a serious health risk to them. In India, there are almost 267 million tobacco users which is the leading cause of death due to non-communicable diseases. With an aim to attract the attention of the tobacco users to quit the habit 'World No Tobacco Day' is celebrated every on May 31, which highlights the health and other risks associated with tobacco use and advocating for effective policies to reduce tobacco consumption globally.

This year’s theme is the protection of younger generations, focusing on “Protecting youth from industry manipulation and preventing them from tobacco and nicotine use.” The theme for this year WNTD is aptly chosen as the tobacco industry is increasingly targeting young people as an emerging and vulnerable market for its addictive products, this is a pressing issue and a challenge for tobacco control policy-makers in every country. World No Tobacco Day 2020: Sachin Tendulkar Sets Example by Not Endorsing Tobacco Products or Alcohol.

Tobacco kills more than 8 million people each year. More than 7 million of those deaths are the result of direct tobacco use while around 1.2 million are the result of non-smokers being exposed to second-hand smoke.

WNTD has been celebrated since 1987 to draw global attention to the tobacco epidemic and the preventable death and disease it causes.

How the tobacco industry targets youth: The tobacco industry tries to lure young people through making it attractive to the specific demographies particularly via packaging or branding. The industry has changed its marketing strategy as it is now more focussing on the online marketing of the products. Such advertisements often circumvent traditional tobacco advertising and promotion regulation as the tobacco product placement is not flagged as an advertisement, and instead surreptitiously embedded in other social media content.

Despite the global efforts to draw attention to the perils of tobacco usage according to WHO, only around 12 percent countries are on track to meet global targets to reduce by one-third the number of people dying from non-communicable diseases by 2030, as part of the Sustainable Development Goals agenda. The WHO wants everyone of its 194 Member States to implement a series of increasingly strict tobacco control measures.

Efforts to control tobacco usage in India: As per the estimates the mortality due to tobacco usage in India is estimated at upwards of 1.3 million, which is based on several studies. This estimate does not include the deaths caused due to e-cigarettes, as e-cigarettes are a distinct product class and are not tobacco products. World No-Tobacco Day 2020: How to Avoid Your Urge For Tobacco? From Nicotine Replacement Therapy to Sugarless Gum, Tips To Resist Cravings Among Users.

The Ministry of Health & Family Welfare has enacted comprehensive legislation, namely the Cigarettes and Other Tobacco Products (COTPA 2003) to discourage the consumption of tobacco products in order to protect the masses from the health hazards attributable to tobacco use.

The National Tobacco Control Programme (NTCP) was launched by this Ministry in 2007- 08 with the aim to create awareness about the harmful effects of tobacco consumption, reduce the production and supply of tobacco products and help people quit tobacco use.

Due to various public awareness programmes there has been a 6% absolute reduction in prevalence of tobacco use from 34.6% to 28.6%.

(The above story first appeared on LatestLY on May 30, 2020 08:10 PM IST. For more news and updates on politics, world, sports, entertainment and lifestyle, log on to our website latestly.com).