Princess Beatrice of York Birthday: Interesting Facts About Her Royal Highness as She Turns 32! 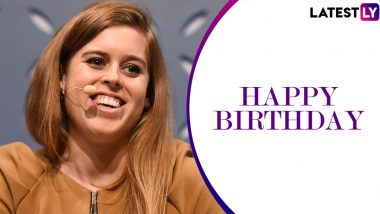 Princess Beatrice is the elder daughter of Prince Andrew, Duke of York, and Sarah, Duchess of York. She is ninth in the line of succession to the British throne, followed by her sister, Princess Eugenie. Born on August 8, 1988, the Her Royal Highness will turn 32 today. Princess Beatrice is quite close to her sister Princess Eugenie and has often been captured together attending different events, marriages and meetings. On her birthday, we bring to you some interesting facts about the UK royal family member.

Princess Beatrice With Edoardo Mapelli Mozzi On Their Wedding Day:

Beatrice is also a charitable patron of several organisations including children's welfare and education. As she is dyslexic, many of the organisations she supports are centred around learning difficulties. We wish Princess Beatrice a very Happy Birthday and hope all her dreams come true.

(The above story first appeared on LatestLY on Aug 08, 2020 09:00 AM IST. For more news and updates on politics, world, sports, entertainment and lifestyle, log on to our website latestly.com).