Stephanie Joplin Was Born in Houston, Texas, as a First Generation American

After she graduated with a degree in hotel management, Stephanie moved to Italy (where Jane’s family is from, Steph speaks Italian) Her dad sent her a hand written note telling her that if she wanted to move to Italy and make her career there, he would support her in whatever way he could. 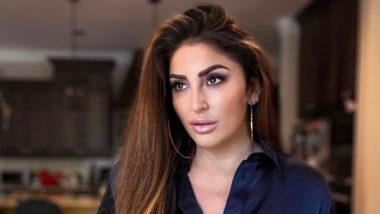 Her parents, Jane and Rawi, have always encouraged her to dream big. They gave her the best education possible, drove her back and forth from volleyball tournaments all over the state, supported her choice to attend UNLV and move to Vegas as an 18 year old, fresh out of a 14 year stint in an all-girls, private, Catholic school.

After she graduated with a degree in hotel management, Stephanie moved to Italy (where Jane’s family is from, Steph speaks Italian) Her dad sent her a hand written note telling her that if she wanted to move to Italy and make her career there, he would support her in whatever way he could. She was back 6 months later and ready to start her career, but that letter sticks with her to this day.

Rawi was no stranger to dreaming big. At 18, he was given a scholarship to a small university in West Virginia. He spoke little English and started with a .75 GPA. He did the work, and even went to grad school and poised himself in such a way that he was recruited by Chase bank to be in Middle Eastern relations, as he spoke both French and Arabic (he was born in Alexandria, Egypt).

In fact, just like Stephanie, he was at the very top of his career when he was laid off. Similarly, Steph was laid off during the pandemic after a decade and a half in the corporate hospitality industry, working for such companies as Four Seasons Hotels, Mandarin Oriental and Landry’s Signature Group. They both knew that they wanted to build something greater, something bigger than working for some person out there somewhere who had no clue who they were!

Stephanie inherited her entrepreneurial spirit from her dad. She knew she had a valuable asset in her side hustle (social media) where she had been a sports journalist amd blogger and also a beauty vlogger among other things over the last 10 years. She knew the ins and outs of branding and content creation and formed Stephanie Joplin LLC, one month after she was laid off in the fall of 2020.

Similarly, Rawi has built a 40+ year, incredibly successful natural stone restoration company, International Stoneworks, inc., off of just ONE product. Now he owns the most successful small business of it’s kind in the state of Texas.

Stephanie knew that she wanted to help other women to be empowered, to be healed, to see their own potential as individuals and wanted to give them the resources to do just that. She wanted to become a one stop shop for all things lifestyle, dating, nutrition, fitness, self love and self care. All things that she, herself, had struggled with over the years.

To create that support system, Steph knew it would have to be bigger than her humble audience of 36k followers on Instagram - how would she reach the masses that way? And so The Luxury Dropout Podcast was born.

Stephanie used to mask her feelings of discontentment and self loathing by buying luxury items. $10-$20k easily a year on handbags, sweatshirts, shoes.

Things that would depreciate in value and all they did was leave her in debt… but she figured If people saw head to tow Gucci, no one would notice her struggling on the inside. Cut to now - While she still enjoys nice things, she prefers to indulge more so in experiences that enrich her from the inside out: fitness, nutrition, seminars, travel, working with coaches in various subject matter, reading voraciously, listening to podcasts etc. She continues to learn every single day how to become the best version of herself that she can be.

There are many struggles along this path - and each day that little flicker of doubt shows up - but she’s transparent about that with her audience. The point is that she keeps moving forward. Even if she’s stuck for a few days, weeks, months.. she continues to be open to healing and open to learning, and most importantly to listen.

Her goal is to create a safe space for women (and men are always welcome, too!) to take this journey with her, no matter where they are in life. Whether you’re 20 or 40+, all of the podcast episodes will resonate with you, no matter the topic. Whether you’re a mom, just graduating high school or college, pushing 30 and feeling like you’re late to the party, or simply looking for a companion to your ear buds on your nightly walk.

While the podcast is still in its’ infancy, Stephanie has taken on select small businesses locally, revamping their social media accounts. Her services include content creation, photography, copy writing, strategy, account growth and engagement.

Eventually she dreams of hosting a women’s retreat where nutrition, spirituality, physical and mental well being are all addressed. She is actually leaving next week to scout locations in Arizona for potential venues to host it. “Dream big, work hard,” to quote JJ Watt. :)

It’s a scary thing to be out there on your own. There’s no one to wake you up in the morning and say, “time for work!” It has to come from your heart. One thing is for sure… If I do my dad proud, I will be the happiest woman on earth.