Hungary Parliament in Delhi! Photographs of UNESCO World Heritage Site to Be Exhibited in National Capital 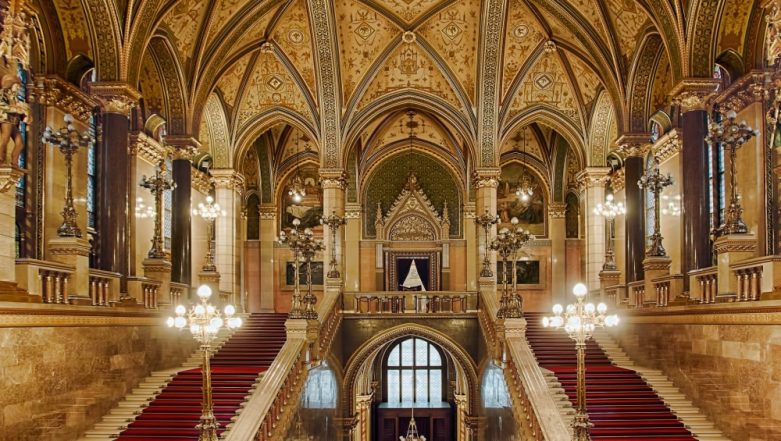 New Delhi, May 14: At a time when the nation is busy choosing its own parliamentarians, the breathtaking architecture of the Parliament building of Hungary, a UNESCO World Heritage site built in the neo-gothic style from 1885-1902, will soon be seen in an exhibition in the national capital.

Located on the banks of the Danube river in Budapest, Hungary's Parliament is one of the largest in the world. To throw in some facts, the 265-metre long and 123-metre wide building has a total of 29 gates allowing entrance into 262 numbered rooms. How it came to be constructed is a story in itself. "A contest was held in the 1880s to find an architect for a new Hungarian Parliament which would represent the nation's sovereignty. "Drawing inspiration from London's Houses of Parliament, the winner was Hungarian architect Imre Steindl who designed the grand, neo-Gothic building which stands today," the Hungarian Information and Cultural Centre said.

It took 17 years to construct the Hungarian Parliament. Sadly, Imre Steindl went blind before his grand design was completed, and died in 1902. Standing tall, the building has seen two World Wars, a number of uprisings and revolutions, and a shifting urban landscape in the landlocked European country. Housed inside the detailed exterior are 242 full-figure statutes, window glass art, ceiling paintings, goldsmith art and vaulted ceilings, wall panels, gothic style doors and windows and furniture made mainly from Slavonian oak. Architectured in the Gothic Revival style with a Renaissance Revival style dome, the century-old building is an emblem of Hungary.