It is not too often that people encounter an individual like Paul M. Aloise Jr. associate attorney with Brooks, LeBoeuf, Foster, Gwartney, Leace & Hobbs, P.A. He focuses on the areas of criminal defense and civil litigation, with an emphasis on personal injury, civil rights protection, employment law, and professional malpractice. 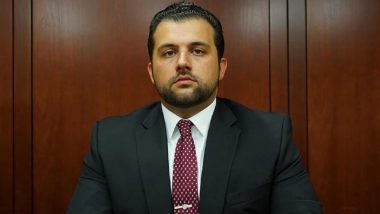 It is not too often that people encounter an individual like Paul M. Aloise Jr. associate attorney with Brooks, LeBoeuf, Foster, Gwartney, Leace & Hobbs, P.A.  He focuses on the areas of criminal defense and civil litigation, with an emphasis on personal injury, civil rights protection, employment law, and professional malpractice. Aloise Jr. is also a former National Champion collegiate football player, an NFLPA Certified Contract Advisor, has represented several established names in the world of entertainment, and is the best attorney around for sports and entertainment since he has personally been on both sides of the spotlight.

Aloise Jr. is more than just a name, a flashy suit, or a charismatic smile, he knows how to deliver, and thrives on the challenge of getting the best possible outcome for his clients.  Paul M. Aloise Jr. was named in the Top 40 Under 40 in Florida for Criminal Defense by the National Trial Lawyers for the last two consecutive years, sits on the National Trial Lawyers Criminal Defense Executive Committee and sits on the Board of Directors for the Young Lawyers Section of the Tallahassee Bar Association. He is also a Super Lawyer 2021 Rising Star, and named the AVVO Client's Choice Award for 2020 and 2021 due to his twenty 5-star reviews and perfect 10.0 rating.

Aloise Jr. was born in Boston and moved to South Florida with his family as a young child. Growing up in Palm City, Florida, he played high school sports and went on to play middle linebacker for the 2013 BCS National Championship winning Florida State football team. He feels right at home in high-stakes competition, comparing the adversarial nature of trials to the pressure on the sports field.

Aloise Jr. spent three years working as a prosecutor, learning how the system works. As a state attorney, he tried some of the most serious cases out there, including Murder, Capital Sexual battery and Armed Robberies, learning what it takes to win a high-pressure case from both sides. As he explains it, learning the offense is the best way to get better at defense. Because he has practiced on both sides of criminal law, played football in the national spotlight, and has worked with some of the most famous athletes and entertainers in the world, he has a unique insight and understanding that gives him an edge and helps him forge a strong connection with his clients.

While in law school Aloise Jr. knew he wanted to continue working with athletes, and since many of his college teammates were now in the NFL, he started marketing for them, and formed his own sports representation company, Renegade Sports and Entertainment LLC, renegadesportsandentertainment.com. After he received his law degree, and passed the Florida Bar Exam, he became an NFLPA Certified Contract Advisor and has represented athletes through three consecutive NFL drafts, and negotiated 12 NFL contracts.

Aloise Jr.’s work as a professional NFL agent has led to many clients in the entertainment industry wanting to hire him as well. He has worked with top-selling platinum hip hop artists, Netflix stars, and other entertainers on issues such as contract negotiation, contract review, trademarking issues, licensing infringement, and other legal matters, both personal and professional. His comfort level and ease in front of cameras, handling media and large crowds, and not being intimidated by his client’s famous standing make him very appealing to clients who spend a lot of time in the public eye.

“It is really important to be able to connect with clients and speak with them on a personal level, and I think me having played football at the level I did, played with a Heisman winner, and having been in front of cameras at the National level, allows me to connect with them in a way that most other attorneys cannot. I am someone who has been in their shoes and understands what they are going through, outside of the issues with their case.”