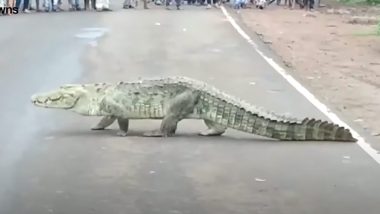 Crocodiles are not rare, but causing a traffic jam on Madhya Pradesh highway is a unique sight. Video of a 10-feet-long crocodile crossing a road in Shivpuri district has gone viral.  The big reptile was seen by villagers while they had taken out their cattle for grazing. Locals soon gathered to see the sight including motorists. Soon, forest officials were alerted who reached the place. The video of the incident went viral after people shared videos. As the crocodile decided to rest on one part of the road, the curious crowd began to swell. Eventually, police had to be deployed on-site to ensure things are control. In the recent past, more than 14 crocodiles have been rescued from nearby villages. Odisha Shocker: Crocodile Allegedly Killed, Eaten by Villagers in Malkangiri District.

As the forest officials did not arrive on time, locals decided to take things into their hands. They tied a rope around the crocodile's neck and pulled it out of the field and released it in a  pond. The crocodile was spotted by cattle grazers near Rannod village at Dekua square. Now, forest officials have been asked to monitor the situation and carry out required rescue operations. Crocodile Attacks Swimmer in Bhopal’s Kaliasot Dam! Friend Saves His Life by Poking the Reptile With Selfie Stick, Graphic Footage Will Send Chills Down Your Spine.

While crocodiles on the road are not a normal affair, in the recent past, it has become one. Earlier, a crocodile had entered BSNL colony in Shivpuri causing fear among people. Water bodies in Shivpuri have marsh crocodile classified as 'vulnerable' species which are protected by law. Reportedly, there are around 100 crocodiles in Shivpuri's Sakhya Sagar Lake. There are more than 500 crocodiles in Chambal River that flow through Madhav National Park.

(The above story first appeared on LatestLY on Aug 08, 2020 09:15 AM IST. For more news and updates on politics, world, sports, entertainment and lifestyle, log on to our website latestly.com).