Crocodile Attacks Swimmer in Bhopal’s Kaliasot Dam! Friend Saves His Life by Poking the Reptile With Selfie Stick, Graphic Footage Will Send Chills Down Your Spine

A frightening moment of a crocodile attacking swimmer in Bhopal’s Kaliasot Dam was captured in the video. The man was dragged underwater by the reptile before his friend saved him by poking the creature with a selfie stick. 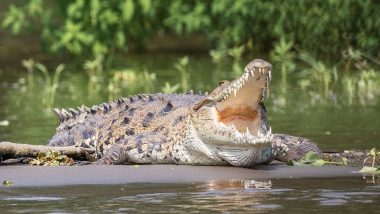 A frightening moment of a crocodile attacking swimmer in Bhopal’s Kaliasot Dam was captured in the video. The man was dragged underwater by the reptile before his friend saved him by poking the creature with a selfie stick. Footage containing graphic content shows the man along with friend swimming in the water, before the crocodile clamped its jaws on the right thigh of the swimmer. Thankfully the other person who was his friend was quick to save him, using a selfie stick to poke the croc. His courageous move saved the man’s life. He survived with stitches after a chunk was reportedly taken out of his right thigh. Teenager Jumps in Ocean to Save a Struggling Turtle, Crocodile Attacks and Snatches it Away.

The victim identified as 30-year-old Amit Jadav along with friend decided to swim in the lake to beat their lockdown boredom. They were playing in the shallow waters of the dam and taking videos, when suddenly the crocodile attacked Jadav from below and pulled him deeper into the water. Leopard Dares to Snatch Away Food From Crocodile’s Mouth! Terrifying Footage Gives Peak at Life Into the Wild.

“I could feel it biting down on my thigh. It was dragging me under. I thought this is it - I'm dead. Had it not been for my friend I'd have been killed for sure,” Jadav was quoted in TOI, as he narrated the incident from his hospital bed. “There was nothing else on my mind but to save my friend. I don’t know how I got the strength and courage, but I went after it. The crocodile had divided around six feet under the water and was moving towards the deeper end of the dam,” his friend Yadav said in the same report.

Yadav further explained that the creature had divided around six feet under the water and was heading towards the deeper part of the dam. He took the pole, swimming in the same direction with his eyes closed, he touched something scaly and realised it was the crocodile. Soon he poked the pointed end of the stick into its body, and the reptile released its grip on Jadav’s leg and swam away. Jadav is recovering, and the forest department promised further help required for any medical assistance.

(The above story first appeared on LatestLY on Jun 11, 2020 06:49 PM IST. For more news and updates on politics, world, sports, entertainment and lifestyle, log on to our website latestly.com).