2020BigPicture Photography Competition winners have been announced. The first place is awarded to Andy Parkinson, a UK Photographer who captured a mountain hare curling up at a Scotland Park protecting itself from the harsh cold weather. We have brought you some of the amazing photos that have won this year. 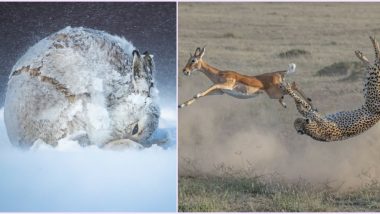 If you have been a wildlife photography enthusiast, then you should be looking through the mindblowing photos that have got a deserving win in the 2020BigPicture Photography Competition. This year, it was the seventh instalment of this competition and the photos are needless to say, amazing. The first place is awarded to Andy Parkinson, a UK Photographer who captured a mountain hare curling up at a Scotland Park protecting itself from the harsh cold weather. Some of the other photos included a leopard catching on his prey of deer, a bat swooping to take a sip of water, cracking mud in a river bed among others. We have brought you some of the amazing photos that have won this year. Comedy Wildlife Photography Awards 2019: Awkward Yet Adorable Photo of Lion Cub Wins The Funny Animal Photo Contest.

This photography competition is held every year by the California Academy of Sciences’. There are different categories in which photographers from around the world send in their entries. This year's theme was Coexistence. There were over 6,000 entries and the judges have selected the top images which show Earth’s biodiversity and illustrate the many threats that our planet faces. The competition was judged by nature and conservation photography experts, including Suzi Eszterhas, Tony Wu, and bioGraphic contributing photo editor Sophie Stafford. Drone Awards 2018: 'Above the Polar Bear' & Other Winning Photographs will Leave You Mesmerised.

Check Out Some Award-Winning Photos of 2020 BigPicture Photography Competition:

The photographer Andy Parkinson endured weeks in the cold weather and drove through the extreme cold and ice to get this shot. These mountain hares are among Britain's fast-declining mammal.

The photo was taken by Yi Lui which shows a chase between a leopard and a deer. The photo conveys the speed with the predator twisting mid-air while the alert prey jumps to make an escape.

The picture taken by biologist Piotr Naskrecki has a Mozambique long-fingered bat swooping down to take a sip of water. It casts the perfect reflection in the water surface.

The picture by Juan Jesús González Ahumada shows the cracked mud on the edge of a river in western Spain.

The picture captured by Jak Wonderly has an interesting backstory got to do with cats. It is estimated that more 2 billion birds are killed by cats in the US. The above photo has 200 of them which did not survive the feline attack!

These are some of the top photos that have won a place in this Natural World photography competition. Although these are not all of them. Click here to check the entire list of winners. Each of these photos try and tell a story about life in nature, among the wild, survival instincts and the need to thrive. Which of these pictures are your favourites?

(The above story first appeared on LatestLY on May 12, 2020 07:15 PM IST. For more news and updates on politics, world, sports, entertainment and lifestyle, log on to our website latestly.com).