An unfortunate moment of an egret being peed on by a rhino has been captured by a wildlife photographer Nagaraj Tilakraj at Kenya's Nairobi National Park. An egret seen standing at the rear of a large rhino is being unfortunately showered by the rhino's urine. 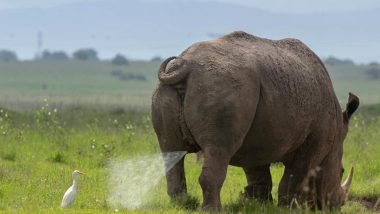 Do you believe that sometimes bad things happen to you because you were simply there at the wrong place at a wrong time? If that's not your approach to look at things, then maybe you should look at this unfortunate moment of an egret being peed on by a rhino. This funny moment has been captured by a wildlife photographer Nagaraj Tilakraj at Kenya's Nairobi National Park. An egret seen standing at the rear of a large rhino is being unfortunately showered by the rhino's urine. It is an old picture but it is once again going viral on social media. Awkward Yet Adorable Photo of Lion Cub Wins The Funny Animal Photo Contest.

Wildlife photographers on safaris have to have a lot of patience to catch some interesting action of animals in their natural habitat. For Nagaraj Tilakraj who visited Nairobi National Park, it was lucky and unusual shot too, something that you may not witness often. This is not a hunt but a surprise shower for an egret by a rhino, not a pleasant one. Egrets and rhinos share a friendship kind of bond in the wild as the birds sit on the rhinos' backs and eat their ticks. Egrets are also said to warn rhinos on potential dangers around them. But this unlucky egret would have nothing but regret from the rhino that peed on him. Oh Sh*t! Elephant Poop Explodes on Vet's Face While Treating Jumbo For Constipation in Thailand, Watch Viral Video.

Although, the egret does not seem to be bothered by this unpleasant shower on him by his pal. The photographer shared it as a matter of one's perception. In his caption, he wrote, "Even if there is storm coming to you.. Be brave like a little #egret to face it. Perspective of how you deal situation matters". That's quiet a way to look at it. The egret be like no regrets?

(The above story first appeared on LatestLY on Jan 16, 2021 09:24 PM IST. For more news and updates on politics, world, sports, entertainment and lifestyle, log on to our website latestly.com).