300 Yaks Starve to Death in North Sikkim After Heavy Snowfall

Nearly 300 yaks have died due to starvation following heavy snowfall in North Sikkim district since late last year, an official has said. 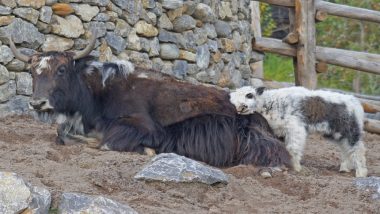 Gangtok, May 12: Nearly 300 yaks have died due to starvation following heavy snowfall in North Sikkim district since late last year, an official has said. The North Sikkim District Magistrate Raj Yadav confirmed the death of around 300 yaks due to starvation during heavy snow fall in Mukuthang and Yumthang regions since December 2018. While carcasses of around 250 yaks were found in Mukuthang region, 50 yak carcasses were found in Yumthang recently, Yadav said Saturday.

"It appears that these dead yaks had got nothing to eat during the prolonged period of snowfall since December last year," Yadav said.

The animal husbandry department's medical team has reached Mukuthang, he said. The team carried feed and fodder for the yaks which are still alive, he said, adding, the yaks will also be examined by the medical team.

The yaks belonged to 15 families in Mukuthang and 10 families in Yumthang, he said. The affected families will get compensations on the basis of a report that is being prepared by the district administration and the Indo-Tibetan Border Police, he added.