A resident of Brooklyn, this alleged subway brake bandit was captured by a commuter on May 16 while he exposed himself to the back of the train. 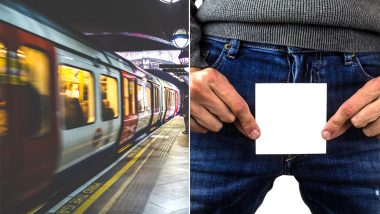 A resident of Brooklyn, this alleged subway brake bandit was captured by a commuter on May 16 while he exposed himself to the back of the train. The commuter took his picture and forwarded it to the cops. In the following week, he was captured on a surveillance camera on the outside of a train at the same station. It was moments before the emergency brakes of the train were pulled. The NYPD then compared the camera footage with the picture from the commuter and found out it was the same person. They managed to get hold of him. His first incident had taken place on March 11. Revenge Porn! Florida Woman Shared Ex-Boyfriend’s Penis Pictures Online and Asked for Money to Stop As Sextortion.

Thompson is arrested and charged with reckless endangerment and criminal trespassing for pulling the brakes on the subway cars. As for his public indecency on May 16, he has been charged with public lewdness. He has intentionally disrupted thousands of commutes by pulling the brakes on the system. He would get aboard the train while it departs and gets to the rear cab. Then he would trigger the emergency brakes and then disappear through subway tunnels. Authorities had been on the lookout for this serial suspect since months.

(The above story first appeared on LatestLY on May 26, 2019 12:17 PM IST. For more news and updates on politics, world, sports, entertainment and lifestyle, log on to our website latestly.com).