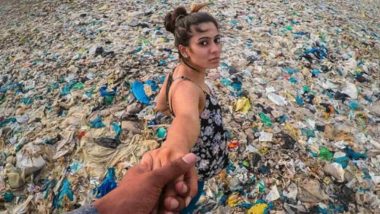 Seas across Mumbai spat tonnes of trash ashore during the high tides earlier this month. Roads parallel to the beaches were covered in scores of plastic bags, crushed bottles, cans and everything we threw into the waters. This is the situation in Mumbai around monsoons every year and other than the sweeping away the trash which some or the other way will land will in the oceans again, nothing much can be done. A photo going viral on social media shows a girl standing right in the middle of a sea of garbage on the Juhu beach. Inspired by Instagram's popular #FollowMe pose,  the girl looks right into the camera while holding a hand, showing garbage behind her.

The photograph was clicked by Ganesh Vanare, a Mumbai-based freelance photographer. Vanare who was with his friend, Aishwarya Sharma, a medical student and blogger at the Juhu beach said they were shocked to see the piles of garbage on the beach. The duo decided to strike a pose in the Instagram famous #FollowMe style for a cause and it instantly struck a chord with netizens.

"Follow me to the city of plastic," reads the caption. The photograph has received more than 41,000 likes in two days and continues to be shared widely on social media.

Can ban on one-time plastic be the solution to the heap of plastic problems the world is currently facing? While Maharashtra has banned the use of polythene bags and other similar plastic products to prevent further damage, the existing crisis is too much to be repaired.

Here is the photo:

Beach cleaners have become a common sight on Mumbai beaches, but how much can we clean away, only the heaps that come along with the tides, right?  In the popular Indian Netflix series Sacred Games, Saif Ali Khan who plays a Mumbai cop Sartaj Singh asks his colleague while sitting on a beach, "What is the point of cleaning these beaches daily? Every morning waves bring along piles of garbage anyway."

That is exactly the problem, we have been so ruthless to the oceans all these years of human civilisation that it can only give us what we have given it. Sartaj Singh's friend replies to it saying, "But it remains clean for a day. It's a lovely place to enjoy the breeze and have a picnic here for those coming to spend a day with their families. Don't we need that too?"

(The above story first appeared on LatestLY on Jul 21, 2018 02:52 PM IST. For more news and updates on politics, world, sports, entertainment and lifestyle, log on to our website latestly.com).