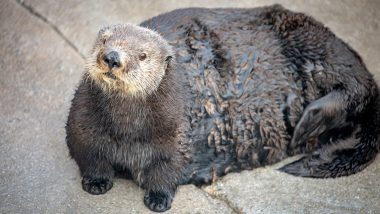 Body shaming is not a good idea, be it for anyone, animals included! The Monterey Bay Aquarium in California had posted a picture of an otter named Abby but their description received flak on the internet. Aiming to make Abby, a meme material for the internet generation, they referred to him as thicc, a colloquial word for fat. Abby was relaxing on the ground and the picture does show him a little fat but the caption did not please the internet. After receiving negative comments from the people, the aquarium apologised for the usage. Best Wedding Proposal Picture: Cute Otters Photobomb UK Couple's Precious Moment, See Viral Photo!

The caption used a lot of internet meme words to refer to the otter, but it soon proved to be controversial. Within 24 hours of posting the picture, the aquarium issued an apology. They mentioned that they were unaware of the actual connotations of some of the words that were used in the caption. Move Over 'Employee of The Month,' This Aquarium Has 'Naughty Penguin' of The Month to Attract Visitors.

Check Picture of Abby The Otter Posted With Meme References

Abby is a thicc girl

What an absolute unit

Look at the size of this lady

The word thicc (meaning thick) is an adjective used for curvy body type. Chonk is used as a unit of cat fatness. People were not impressed with the use of thicc and called out to the aquarium as racist. In a 4-part tweet, the aquarium issued an apology.

Hey everyone. It has come to our attention that some of the references in this tweet are problematic and insensitive. We're posting here in the thread so that people who have engaged with this tweet will join us in our learning moment. 1/4

Abby is 11 years old and weighs about 20 kgs. Christine DeAngelo, the aquarium’s curator of mammals had said that Abby is not really fat but the photo was taken from a really bad angle. She was described as one of the most photogenic animals in the aquarium. Well, we agree.

(The above story first appeared on LatestLY on Dec 22, 2018 05:31 PM IST. For more news and updates on politics, world, sports, entertainment and lifestyle, log on to our website latestly.com).