Accent Done Right! From Bihari Man Talking like an American to an Australian Speaking in Bhojpuriya Style, Videos That Are so Perfect That It Will Boggle Your Mind 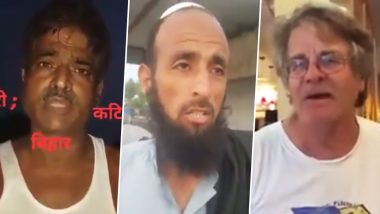 Accent impressions are fun but sometimes they can deceive you and HOW! You may have definitely stumbled upon viral videos of people doing different accents while scrolling on social media but some of these videos are so incredible that they leave an impression on your mind. Imagine an Australian person speaking in bhojpuriya style or maybe a Bihari man speaking in the most fluent American accent ever?! Isn't that mind-boggling? Well, some of these videos have taken over the internet in the past. Let's take a look at some of the best ones that the internet has to offer.

Doing accent impressions isn't an easy task, it takes copying the pronunciation, enunciation and even the expressions and stresses. But some people are just god-gifted and some of these people became a viral sensation in no time. Let's take a look at the best accent impression videos of all time.

This allegedly Afghani man speaking in the fluent Australian accent is the best thing you will see today. Right from his enunciation to the putting stress on just the right words, this man knows how to do it perfectly. Check out:

Here's another one that will blow your mind. Look at this Bihari man speaking in the most American accent ever. It seems that this person has picked up the accent from the cricket commentary but it is so on-point. Check out:

This one probably takes away the cake. This Australian man doing the perfect Bhojpuri accent is the most satisfying sight ever because of how flawless the video is. Take a look:

Aren't these amazing? Remember last year, when after singing the famous Bollywood song "Kal ho na ho", the popular group of Nigerian boy conquered the internet with a really cool cover of another Hindi song-"Bholi Si Surat" by Udit Narayan. The Shah Rukh Khan, Karisma Kapoor and Madhuri Dixit starer Bollywood song where SRK is seen playing a Balalaika, lip-syncing Udit Narayan's voice.  Not just that, Samuel Singh, a singer from Nigeria. He recently sang the cover of Bhojpuri song, whose lyrics go,“Chat Deni Maar Deli Khich Ke Tamacha, Hihi Hihi Hans Delen, Rinkiya Ke Papa Hihi Hihi Hans Delen” and obviously, the internet has lost its calm. Samuel who loves India so much that he adopted ‘Singh’ (an Indian surname) surname to his name. We believe that accent impressions do bring people closer. What do you think?

(The above story first appeared on LatestLY on Oct 18, 2020 08:10 PM IST. For more news and updates on politics, world, sports, entertainment and lifestyle, log on to our website latestly.com).