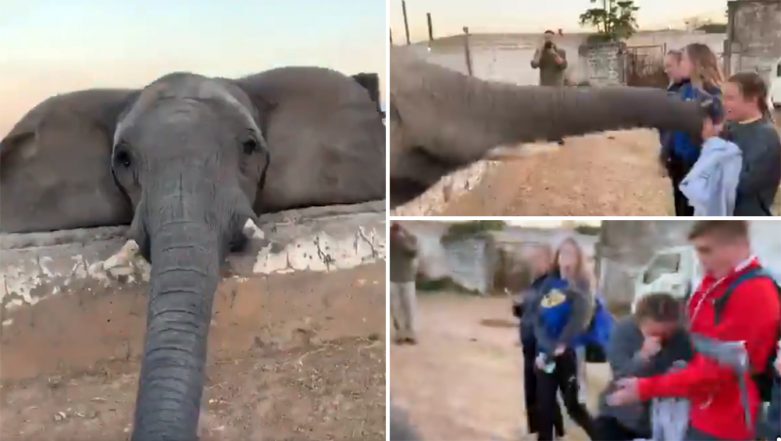 One high school girl from Pennsylvania learned a hard lesson, on her recent visit to the African country, Zambia. She was petting and trying to capture the wildlife, without realising that she is standing too close. The African elephant was not pleased with her gesture, and slapped the young girl, while she was trying to click a picture. The viral video of the incident was first shared on Twitter, warning netizens to always keep a safer distance, while visiting the animal. Elephant Creates Chaos During Temple Festival in Kerala's Palakkad; Topples Car, Injures Mahout.

The unidentified girl was reportedly on a 12-day mission trip to Zambia with her high school friends. The group was walking to dinner on their first night at the country, when they came across the large elephant. While she was admiring its beauty by clicking pictures and petting it, little did she realise that it will hit back, right at her face. “I felt like 10 people had punched me at once as I was catapulted backward and my phone flew forward to the ground,” she was quoted in Fox News after the incident went viral. She further added that one of her friends who was standing behind her, hold her, before she fell on the ground. Elephant Turns Violent After Being Hounded by Locals, Kills Forest Official on Tamil Nadu-Andhra Pradesh Border.

Thankfully, she did not get hurt, but surely learnt a life lesson. However, the schoolgirl in the same report stated that the above incident will not stop her from admiring the wildlife. The clip has garnered millions of views as it has been widely shared on all the social media platforms.