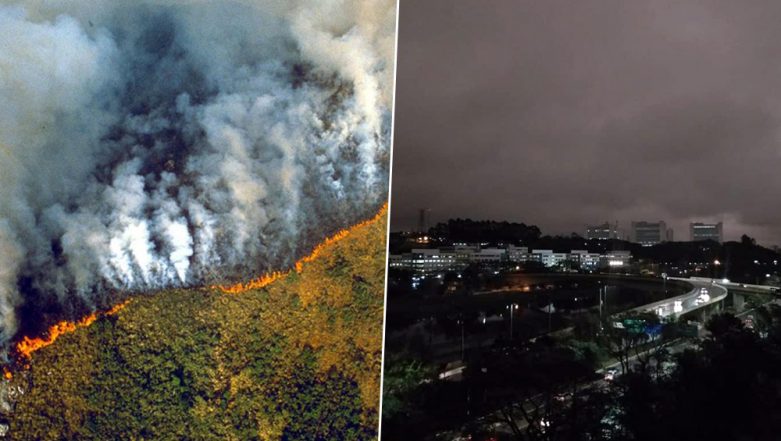 Brazil's Amazon rainforest, the largest rainforest in the world has caught a massive wildfire. The effect of the emerging smoke from the forest fire caused a massive blackout in the country's largest city of Sao Paulo. The daytime turned like quiet night as the smoke engulfed the city skies. The powerful winds carried the smoke more than a thousand miles away in the city. The smoke travelled from states of Rondônia and Amazonas and took over Sao Paulo. Residents took to social media to post pictures and videos of daytime turning into midnight. Amazon Rainforest Fires Hit Record Number This Year With 72,843 Incidents Detected So Far by Brazil's Space Research Centre.

The darkness in the city prevailed for more than an hour. The huge fire has been raging for more than two weeks now. The authorities have already mentioned that a record number of fires have burnt in the Amazon this year. People on social media expressed concerns about the widespread of these disastrous wildfires. #PrayForAmazonia started trending on Twitter with people posting pictures of the massive wildfires. And as Sao Paulo was covered in a blanket of thick smokes, it sparked more concerns about the issue.

This is the sky of the biggest city in the country of Brazil, São Paulo at 2-3 P.M.

The smoke of the burning Amazon Rainforest has covered it entirely.

OUR PLANET IS DETERIORATING BEFORE OUR EYES AS A RESULT OF CLIMATE CHANGE!

Imagine the extent of burning fire

🌎Just a little alert to the world: the sky randomly turned dark today in São Paulo, and meteorologists believe it’s smoke from the fires burning *thousands* of kilometers away, in Rondônia or Paraguay. Imagine how much has to be burning to create that much smoke(!). SOS🌎 pic.twitter.com/P1DrCzQO6x

🌎Just a little alert to the world: the sky randomly turned dark today in São Paulo, and meteorologists believe it’s smoke from the fires burning *thousands* of kilometers away, in Rondônia or Paraguay. Imagine how much has to be burning to create that much smoke(!). SOS🌎 pic.twitter.com/P1DrCzQO6x

This is São Paulo at 3pm!

Smoke from the Amazon fire blocked out the sun.

The planets lung has been burning for 3 weeks and I found out today.

Here’s a literal picture of São Paulo at around 4 pm yesterday. The sky looked that way because of the smoke, everyone thought it was the apocalypse pic.twitter.com/sqQ4LwQfSK

this formed a pollution cloud that came over the state of São Paulo yesterday, it was like 4 PM and it looked like it was at night pic.twitter.com/CPea0hSCvJ

The pictures are sure frightening and raise a concern about the extent of these wildfires. The Amazon rainforest is one of the most important ecological systems on the planet. It serves as an important forest cover to reduce the effects of global warming. There are several appeals to Save the Amazon from the fires but the extent of the fire is too huge. The cause of these fires has become a debatable issue among everyone. While the natural causes cannot be ignored, they are also deliberately started to illegally deforest land. While the extent of the fires is sure a cause of worry, the aftereffects are more worrisome.