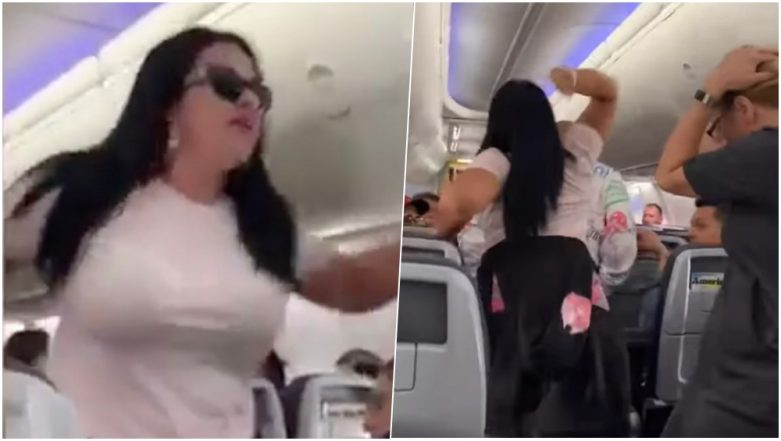 A jealous girlfriend went in a terrific fit of rage because her boyfriend looked at other women. The couple was travelling by flight when the guy happened to eye other women in the flight and the girl just could not take it. A fight started between the two and the girl ended up smashing the laptop on her boyfriend's head. While other passengers tried to intervene and calm the situation, the girlfriend only got angrier. The entire shocking fight was captured on video and the footage is since then going viral. UK Man Who Tried to Gouge Out Girlfriend’s Eyes Because She ‘Liked' a Facebook Post Jailed for 9 Years.

The incident took place on American Airlines flight from Miami to Los Angeles. The couple started fighting while they were on their seats. An anonymous woman soon started ranting and screaming at her partner. When he got up and was walking down the aisle, she chased him and violently attacked him with the laptop. The air stewardesses nearby tried to calm down the situation but the woman was too enraged. She shouted, "ou want to try to f*****g look at other women, n****r? Nah, f*** you!" Game of Thrones Sex Scenes and Nudity Drive Girlfriend Jealous; Boyfriend Gets the Silent Treatment.

Watch Video of Girlfriend Attacking Boyfriend With a Laptop:

As the man got up and left his seat, she started beating him. And when he says, "You're assaulting me man" to she replies "Oh, I'm assaulting you?" The moment she smashed the laptop, other passengers screamed in horror. The woman was then informed by the pilot that she is likely to be charged with assault. But she did not care much and replied, "Fine, whatever." Eventually, both of them had to be removed from the aircraft to ensure a smooth flight for other passengers.