Seven students of a college in Assam have been suspended after being caught indulging in an "inappropriate act" in the classroom. 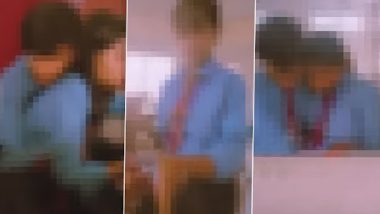 Silchar, Aug 11: Seven students of a college in Assam have been suspended after being caught indulging in an "inappropriate act" in the classroom.

A group of boys and girls from Class 11 of the college were hugging and poking each other in the classroom. Another student of the same class recorded the video and later uploaded it on the social media.

The incident happened in Ramanuj Gupta College of Silchar, a private-run institute in the state. Uttar Pradesh Shocker: Teachers Booked, Suspended for Forcing Dalit Girl Students To Take Off Uniform at School in Hapur

The video went viral and netizens criticised the students' behaviour. Some also blamed the college authority.

The videos came to the notice of the college authorities on Wednesday, and seven students were immediately barred from attending college.

Out of seven, four were girls and three were boys.

The college authority has issued notice to the students saying that they were visibly indulged in acts of turpitude. Such types of activities are tantamount to gross violation of discipline of the institution. Therefore, the following erring students were suspended from attending the classes for an indefinite period.

Principal of the college, Purnadeep Chanda told IANS: "The students did this turpitude act in tiffin hours when no teachers were present. We have CCTV cameras on the college premises and mobile phones were also banned on the campus."

He further said the students are from the fresh batch of Class 11 and it has been hardly 15 days since they started to attend the college.

Meanwhile, the college authority has also summoned the guardians of those seven students. It is learned that college may take more strict action and the students may be rusticated from the institution.

(The above story first appeared on LatestLY on Aug 11, 2022 08:12 PM IST. For more news and updates on politics, world, sports, entertainment and lifestyle, log on to our website latestly.com).