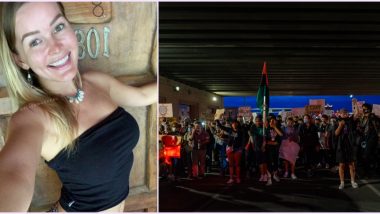 An Australian porn star who tried to make a speech in her flight in support of the George Floyd protests was dramatically escorted off the plane. Elle Knox, 28-year-old was flying to San Francisco from Houston on a United Airlines flight. In her flight, she spoke in appreciation of the current protests in the US and asked people to not be complacent. She was then dramatically escorted off on landing in San Francisco, from where she has a connecting flight to Sydney. The police were deciding if she should be allowed to board the next flight. Elle posted about the incident on her Twitter account. Who Was George Floyd? Why Was He Detained? Here's Why the Death of the 46-Year-Old African-American in Minneapolis Sparked Violent Protests in US.

Knox is known for posting steamy pictures on her social media pages but she took her flight as a podium to address 300 plus passengers about the current situation in US. She spoke that even if she is Australian, she knows how democracy in the US is being threatened and that people should not take the situation lightly. She also spoke against police brutality, before she was taken off by the authorities. On her Twitter, she narrated what she spoke. Black Lives Matter Protest: Powerful Photos From George Floyd Protest That Show Resistance, Anger, Despair, Hope And Love!

My flight from Houston to San Francisco just landed. I stood up and said “This isn’t my country, I’m an Australian. But I’ve noticed your democracy being threatened. Do not be complacent. Decide what side of history you’d like to be on.”

They are deciding if I’ll be allowed to take my next flight to Sydney... pic.twitter.com/YdpS4T6XvS

She mentioned that she was told she could not make a political statement on a United Airline, to which she responded that it was a human rights statement. She has made a lot of tweets against police brutality in the last two days. On Tuesday, she updated that she could catch her flight home. She was told that her statements scared people on the flight. But she also mentioned how people clapped for her when she was escorted off the plane. In one of her tweets, she even wrote, "If I could, I’d be at a protest! But I can’t, so I used my voice where I could. I’d rather do what I did, than stay silent."

The protests in support of Black Lives Matter, following the death of George Floyd took violent turns in several parts of the US. Police have imposed curfews to get the situation under control. National Guard has been ordered to control the protests in over a dozen places. In some parts, people have resorted to peaceful protests and demonstrations.

(The above story first appeared on LatestLY on Jun 03, 2020 04:33 PM IST. For more news and updates on politics, world, sports, entertainment and lifestyle, log on to our website latestly.com).