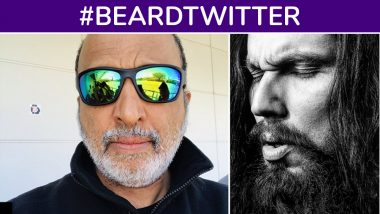 Twitter has been sprouting with a variety of trends in the past three days. From saree to chappals, the social media platform has been witnessing a barrage of tweets on different topics. With #SareeTwitter being one of the major Twitter trends, women had taken to the platform sharing pictures of them adorning in the beautiful garment. While women ruled Twitter yesterday with their saree pictures, men have taken to social media with facial hair pictures. Men have taken to the social media platform sharing pictures of their beard with the hashtag #BeardTwitter. With more and more men sharing pictures of their facial hair, the Twitter trend has inspired #BeardChallenge. As #SareeTwitter Trends on Twitter, Women Share Pics of Themselves Draped in a Sari.

One of the first people to join the Twitter trend was a politician and National spokesperson of Indian National Congress, Sanjay Jha. Sharing a photo of his bearded face, he wrote, in which he can be seen rocking the beard-look and wrote, "#beardtwitter? Well, time to join the party, I guess."

#beardtwitter ? Well, time to join the party, I guess. pic.twitter.com/v161rBbkT7

Bollywood actor Randeep Hooda and singer Aaman Trikha also took to Twitter sharing photos of their beard. Photos of Shahid Kapoor's look in Kabir Singh was also widely shared on Twitter. Congress leader Priyanka Gandhi Vadra had also shared a photo of her in a saree from her wedding.

Commoners also took to social media sharing pictures of themselves in the beard.

German actress Suzanne Nernert who had shared pictures of #SareeTwitter challenge took to Twitter sharing pictures of her dad who sports a beard. She shared the photo with the caption, "#beardtwitter with my Dad ...u see a trend ? Lots of bearded Guys in my Life !!"

#beardtwitter with my Dad ...u see a trend ? Lots of bearded Guys in my Life !! pic.twitter.com/wvyvWLYX52

Once upon a #maharaja #pastlifelook

#KhakiTwitter had also made it to Twitter trend on Wednesday encouraging police officials from different localities to share pictures of them in uniform. And lately, #SuitTwitter has also started picking up the trend with men sharing pictures of them in the three-piece ensemble. It seems people have got obsessed with looks and apparel on Twitter. We wonder what would be the next big thing going to catch the trend on the social media platform.

(The above story first appeared on LatestLY on Jul 18, 2019 02:41 PM IST. For more news and updates on politics, world, sports, entertainment and lifestyle, log on to our website latestly.com).