Lebanon's Deadly Beirut Blast: Video of Father Doing his 'Absolute Best' to Protect His Son After Their House Shudders Due to the Massive Explosion Will Break Your Heart 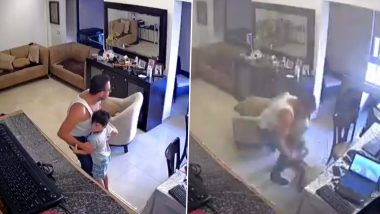 It's only during the testing time that you get to know who actually cares about you even when it comes to parents. A recent video that is going viral is proof that no matter what fathers will everything under their capacity to protect their children, even when on the verge of death. This video shows a father doing his absolute best to protect his son while the effects of the unfortunate explosion in Beirut made his house tremble. The video starts off with the huge explosion noise and then the man's house begins to shudder.

You can see the TV screen rock while the man chanting "Allah hu Akbar" holds his child close to him and runs around frantically. He then sees the table around him and first tucks his son under it before getting inside himself. The video has already received over 3 million views with people sending prayers for Lebanon and lauding the father.

The clip shared by @2020concepts on Twitter went viral along with the caption "A father doing his absolute best to protect his son from the explosion in Beirut.. Pray for Lebanon". About 2,750 tonnes of ammonium nitrate stored in the Beirut port warehouse that exploded on Tuesday, 04-08-2020 devastating major parts of the Lebanese capital. Lebanon has been suffering due to conflict for a very long time and is currently in mourning after a massive explosion. Amid the horrific blast videos, this father-son video is breaking hearts. Watch video:

A father doing his absolute best to protect his son from the explosion in Beirut..

The blast has killed over 70 and injured about 4,000 people. "It is unacceptable that a shipment of 2,750 tonnes of ammonium nitrate has been present for six years in a warehouse, without taking preventive measures," Lebanon PM said at a defence council meeting.

(The above story first appeared on LatestLY on Aug 05, 2020 11:09 AM IST. For more news and updates on politics, world, sports, entertainment and lifestyle, log on to our website latestly.com).