Beirut Explosion: Burj Khalifa And Egypt's Giza Pyramids Lights Up in Colours of Lebanon Flag in Solidarity With Victims 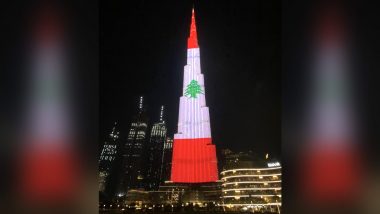 Beirut, the capital of Lebanon was rocked by a huge explosion on Tuesday destroying half of the city. Paying condolences to the city, the Burj Khalifa, the tallest building in Dubai were lit up with the flag of Lebanon. The iconic pyramids in Egypt also paid solidarity to those who lost their lives in the explosion. Over 4,000 people were injured and the death toll is above 100. The country’s Prime Minister Hassan Diab declared a national day of mourning and promised that those responsible for the “catastrophe” would be held accountable. Lebanon's Deadly Beirut Blast: Video of Father Doing his 'Absolute Best' to Protect His Son After Their House Shudders Due to the Massive Explosion Will Break Your Heart.

Sharing the photo on Twitter, the official account of the Burj Khalifa, the world’s tallest building wrote, "In solidarity with our brothers and sisters in #Lebanon." Giza pyramids in Egypt were also illuminated on Tuesday night with the colours of Lebanon flag in solidarity. #PrayForLebanon and #prayforbeirut were among top trends on Twitter on Tuesday. People continue to post tributes to the country and its people who are mourning the death of their loved ones. Lebanon Blast Caught on Camera: Terrifying Videos and Images of Explosion at Beirut Port Shared, Over 50 Dead So Far.

President Michel Aoun said that the cause of the blast was 2,750 tonnes of ammonium nitrate stored unsafely in a warehouse. Ammonium nitrate is used as a fertiliser in agriculture and as an explosive. The country has declared three days of mourning from Wednesday.

Giza Pyramids Light Up in Colours of Lebanon Flag:

they lit the pyramids in egypt as lebanon's flag in respect for them and again please lebanese oomfs stay safe🥺 pic.twitter.com/rEN28zjkYN

The blast was also felt 240km away on the island of Cyprus, in the eastern Mediterranean where people thought it was an earthquake. According to state media, 90% of Beirut hotels have been damaged. The EU has offered its full support to Lebanon and activated its Civil Protection Mechanism (CPM) in response to the crisis. Hundreds of people have been reported missing by families in the aftermath of the blast.

(The above story first appeared on LatestLY on Aug 05, 2020 05:15 PM IST. For more news and updates on politics, world, sports, entertainment and lifestyle, log on to our website latestly.com).