Billie Eilish's Viral Tank Top Pic Row: 'This Is How I Look', Singer Responds to Trolls Who Fat-Shamed Her! Other Times 'Therefore I Am' Singer Replied in the Most SAVAGE Manner

The 'Bad Guy' songstress has been applauded by her fan base in the past for her impressive clap-back skills and honesty about struggling with body confidence. She said it's perhaps one of the most important parts of her communication with her fans. 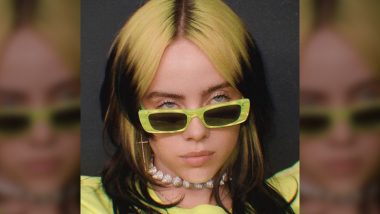 Billie Eilish recently spoke out to silence body shamers. According to Fox News, the 18-year-old usually makes headlines for her record-breaking hits, but back in October, she was the target of online trolls who wouldn't stop obsessing over photos of her in a tank top. Billie Eilish has spoken out after she was targeted by body-shaming trolls when she was pictured wearing a tank top in the summer. Speaking to Vanity Fair for a short video Q&A, the 18-year-old singer was asked: “What’s the biggest rumour about you?” Eilish used the questions as an opportunity to respond to online trolls who have criticised her appearance. “There’s this picture of me running from my car to my brother’s front door on like a 110-degree day in a tank top,” Eilish said, referencing a photo of herself in Los Angeles. Billie Eilish has responded to the cruel comments made about her body after photos of her running around in a tank top went viral.

When Vanity Fair asked the star what the biggest rumour about her is, Eilish said, "There's this picture of me like, running from my car to my brother's front door on like a 110-degree day in a tank top. And people were like, 'Damn, Billie got fat!' And I'm like, 'Nope, this is how I look, you've just never seen it before!' So that's the most current one, but whatever." The 'Bad Guy' songstress has been applauded by her fan base in the past for her impressive clap-back skills and honesty about struggling with body confidence. She said it's perhaps one of the most important parts of her communication with her fans. "I love having kids relate to me and tell me that I make them feel comfortable in their bodies. If I can do anything, I want to do that," she said.

As per Fox News, the Grammy-winning artist has previously explained why she wears oversized clothes on red carpets and during performances.

She told Forbes, "It kind of gives nobody the opportunity to judge what your body looks like. I want layers and layers and layers and I want to be mysterious." As per Fox News, Eilish echoed her statements in British GQ for its July/August cover story, saying that she's learning to love her body as she gets older and her decision to not show it off is her realization of her power.

"My body is mine and yours is yours. Our own bodies are kind of the only real things which are truly ours. I get to see it and get to show it when I want to," Eilish said.

In October, photos of the 'Therefore I Am' singer wearing a pair of shorts, sliders and a tank top started circulating the internet. Billie looked absolutely fine, of course, but she was soon subjected to judgemental comments about her body shape from trolls. Billie's fans then defended her against the body shaming. Billie has now opened up about the incident during her annual interview with Vanity Fair. Billie was asked what was the biggest rumour that she had heard about herself. She responded: "There's this picture of me running from my car to my brother’s front door on like a 110 degree day in a tank top. And people were like, 'Damn, Billie got fat!' And I’m like, 'Nope, this is how I look, you've just never seen it before!'"

In Feb 2020, The Bad Guys singer spoke candidly about how nasty social media users have stopped her from interacting with her fans and how she stopped using platforms to engage with them only two days ago. ‘I stopped reading comments full because it was ruining my life,’ Billie said as she sat alongside her brother Finneas, who co-wrote her Bond track No Time To Die. ‘It’s weird, the cooler things you get to do, the more people hate you. It’s crazy.’

As reported by Page Six, Eilish explained in a video for Calvin Klein in May 2019, "I never want the world to know everything about me. I mean, that's why I wear big baggy clothes. Nobody can have an opinion because they haven't seen what's underneath, you know? Nobody can be like 'oh she's slim-thick, she's not slim-thick, she got a flat ass, she got a fat ass.' Nobody can say any of that because they don't know." She also opened up about being s**t-shamed for wearing a bathing suit, saying in April, "I can't win. She then fought back against the critics by stripping down in a YouTube video titled 'Not My Responsibility.' Since then, Eilish has continued to wear her signature baggy look but mixes it up.

(The above story first appeared on LatestLY on Dec 03, 2020 02:36 PM IST. For more news and updates on politics, world, sports, entertainment and lifestyle, log on to our website latestly.com).