Binod Funny Memes: Mumbai Police Joins the Bandwagon to Spread Online Safety Awareness Through the Hilarious Trend, Viral Tweet Is a Must See! 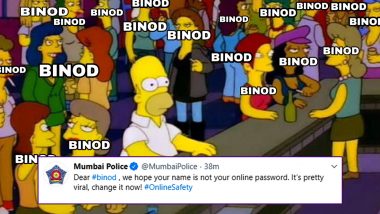 By now, you are definitely aware of the hilarious Binod meme trend that has taken social media users by storm. It has grown into a funny meme trend, and people do not seem to be tired of making more and more reactions around it. While the hilarious responses and posts are on, Mumbai Police too joined in the bandwagon. We all know that the official Twitter handle of Mumbai Police is quite active, and they often impress followers with their wittiest tweets, joining the viral trend and spreading important messages in the form of a meme. So, when Binod began to trend on Twitter, it was only natural for the police’s official handle to participate in the viral trend too. Joining Binod meme trend, Mumbai police spread online safety awareness in a unique way one could imagine, and the viral tweet is a must-see, in case you haven’t. Latest Meme Templates For Free Download: From Hera Pheri Dialogues to Coffin Dance Video, These Meme Formats Will Help You Make Funny Jokes.

Since early morning today, August 7, Binod was running as one of the top trends on Twitter. So, who is Binod? He is just another random person on the internet, whose name has been used as an example of how people make comments on YouTube videos that make no sense. The name in reference became a hit, after YouTube channel Slayy Point used it in their video and soon it was picked up all over social media. Funny memes and jokes on Binod became a hit on the internet and people continue to make more hilarious posts on it.

Mumbai Police, who is quite popular for its witty tweets and comments, too participated in the viral trend, but to give an important message. “Dear #binod , we hope your name is not your online password. It’s pretty viral, change it now! #OnlineSafety.”

Dear #binod , we hope your name is not your online password. It’s pretty viral, change it now! #OnlineSafety

So, you heard it! If your name is Binod, and by any chance, any of your social media accounts or other profiles on the internet’s password is your name, maybe now it’s time to change it. Because the name is pretty viral now and the trend seems to stay for a few more days, at least.

(The above story first appeared on LatestLY on Aug 07, 2020 05:55 PM IST. For more news and updates on politics, world, sports, entertainment and lifestyle, log on to our website latestly.com).