The owners of Cannoli by Café Soul, identified as Uzma Chaudary and Dia Haider, purportedly recorded the one-minute video clip, as they were “bored.” They were captured making fun of the manager's English. After facing the massive outrage from social media users, the restaurant took to Instagram, issuing an apology. 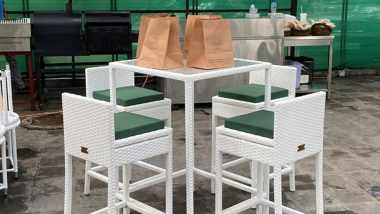 Cannoli by Café Soul—a restaurant in Islamabad, Pakistan is garnering worldwide attention, after netizens demanded to boycott the café. Why? Its ‘privileged’ owners were captured in viral video, making fun of a staff member for his English speaking skills. The video has sparked outrage on social media. #BoycottCannoli is running as one of the top Twitter trends. People even went ahead by giving poor ratings on Google reviews for the café. The owners of the restaurant, identified as Uzma Chaudary and Dia Haider, purportedly recorded the one-minute video clip, as they were “bored.” After facing the massive outrage from social media users, the restaurant took to Instagram, issuing an apology, adding that the video was not intended to hurt anyone.

The video begins with Uzma and Dia, introducing themselves and then the restaurant’s manager, Awais, who has been working with them for nine years. Dia begins the conversation, asking him, “How many classes have you taken for English?” to which Awais replied, “three.” Uzma further asked, “Could you please speak to everyone in English and say a sentence?” Awais tried his luck at speaking the language, but the owners seemed to mock the manager. Nurse Ruthlessly Mocks Patients Over Health Issues in a Viral TikTok Video.

“So, this is our manager who has been with us for nine years. And this is the beautiful English he speaks. This is what we paid for... and a very good salary, mind you,” the women can be heard saying.

Just got sent this. Sick to my stomach. No words for our eNgLisH fLueNt elites. Never seen more tone deaf women with this confidence. pic.twitter.com/5eIj9hWOnZ

The video garnered outrage on social media. The original video that was posted on Instagram was taken down, before it already began to circulate on other platforms such as Twitter and Facebook.

Internet is Not Impressed!

Even with the impeccable english, the colour of our skins will still remain brown. Respecting humanity is a better trait learnt than learning a foreign language.

Kindness is the Best Language!

Instead of Boycotting the Restaurant, This is What You Can Do!

Some deciding to boycott this place. Don’t do that. The manager will face. Rather go there & give 5 star to this employee. He managed this Restaurant without knowing English. He deserves applause.

People have gave poor ratings to the restaurant, flooding the comment section with how pissed they were at the owners for making fun of their staff member. “These people don't know how to treat their staff and make fun of them publicly for not speaking English as fluent as they can. You are a restaurant, not an academy, act like it,” wrote one person and gave a one-star rating. Following the massive outrage, Cannoli by Café Soul took to Instagram to issue an apology, adding that the video was meant to be light-hearted and never intended to hurt anyone’s sentiments. #PatientsAreNotFaking Trends As People Share Horrifying Medical Experiences After TikTok Video of Nurse Mocking Patients’ Health Issues Goes Viral.

A post shared by Cannoli by Cafe Soul (@cannoli_cafesoul)

Cannoli by Café Soul currently holds a disappointing 2.7 out of 5 ratings. Many have written against the owners on the brand’s Facebook page, hours after the video was posted. On Instagram, the restaurant has disabled the comments section on the apology post.

(The above story first appeared on LatestLY on Jan 21, 2021 07:32 PM IST. For more news and updates on politics, world, sports, entertainment and lifestyle, log on to our website latestly.com).