The clip which is being widely shared Chinese social networking sites shows pedestrians and motorists looking in shock as the employees crawl in the middle of a busy road. 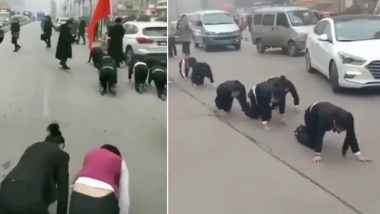 In a shocking incident, a Chinese company made their employees crawl on the road for not being able to complete the targets given to them. The clip shows women crawling on their knees for missing the year-end targets. The video has now gone viral leading to social media outrage.

The clip which is being widely shared  Chinese social networking sites shows pedestrians and motorists looking in shock as the employees crawl in the middle of a busy road. A man can be seen walking ahead of them holding a red flag with the name of the company written on it. According to Daily Mail, all the employees who were made to crawl were women working for a company that sells beauty products. Chinese Company Punishes Underperforming Workers by Making Them Eat Cockroaches, Drink Urine.

Last year video of a female employee slapping male employees for not reaching their targets had sparked anger on social media. There have been many such incidents where underperforming employees were physically hurt with humiliating punishments. In one such case, a video had gone viral in which employees could be seen repeatedly slapping themselves.

Here is the video of Chinese employees crawling on the road:

As the incident garnered public attention, police were informed and soon reached the place. Cops intervened and ask the group to stop carrying out the punishment. The company involved has garnered the wrath as the video went viral on Chinese social media sites.

However, some internet users said that the activity would be probably carried out to advertise about themselves and that it is some business pyramid scheme. According to reports, local authorities asked the company was asked to stop their business. While Chinese employment contract laws are against corporal punishment, such toxic culture is very common in companies.

(The above story first appeared on LatestLY on Jan 17, 2019 01:09 PM IST. For more news and updates on politics, world, sports, entertainment and lifestyle, log on to our website latestly.com).