Raman was honoured with Bharat Ratna, the highest civilian honour in India in 1954. 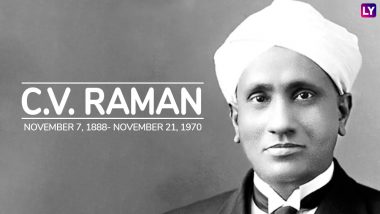 In 1917, Raman quit his government service and was appointed the first Palit Professor of Physics at the University of Calcutta. Raman had asked the Government of India to provide more for the growth of scientific institutions in the country. In his Nobel lecture, Raman said that "a voyage to Europe in the summer of 1921 gave me the first opportunity of observing the wonderful blue opalescence of the Mediterranean Sea." On his death anniversary, politicians, celebrities, commoners have all taken to Twitter wishing the

Here are some of the tweets:

A humble homage to Sir #CVRaman, one of the greatest physicists of not just India, but the world.

He will forever be remembered for his pioneering work in the field of light scattering and quantum photon spin. pic.twitter.com/8dAqOxPPRX

In 1948, he became the director of Raman Research Institute in Bangalore, he held the position until his death on November 21, 1970.

He was honoured with Bharat Ratna, the highest civilian honour in India in 1954.

We celebrate the life of Nobel Prize winner and Bharat Ratna awardee physicist Sir #CVRaman whose pioneering work change the field of science across the globe. pic.twitter.com/3zUzvVdRMP

In 1989, director Nandan Kudhyadi made a biopic on his life 'C.V. Raman: The Scientist And His Legacy' that won national awards.

My Humble tribute to one of India's most revered scientist and the Nobel laureate Physicist Sir C V Raman ji on his death anniversary.#CVRaman pic.twitter.com/Zw4wA2JKtj

February 28th has been declared as National Science Day by the Indian Government to commemorate his work.

Tributes to the great physicist, Nobel Laureate and #BharatRatna #CVRaman on his death    anniversary. pic.twitter.com/r5Mw5FSFCM

Salutations to the First Indian Nobel Prize winner for Physics, BharatRatna Sir C.V. Raman ji on his death anniversary. His scientific accomplishments remind us of how he excelled under adverse circumstances. #CVRaman pic.twitter.com/fUT6TDvg32

Raman passed his matriculation at the age of 11 with first class. He also received a scholarship after passing his intermediate exam at the age of 13. In 1904, he completed his graduation from the University of Madras with a gold medal. He also has an MSc degree with the highest distinction from the same university. He passed away at the age of 84 on November 21, 1970.

(The above story first appeared on LatestLY on Nov 21, 2018 12:10 PM IST. For more news and updates on politics, world, sports, entertainment and lifestyle, log on to our website latestly.com).