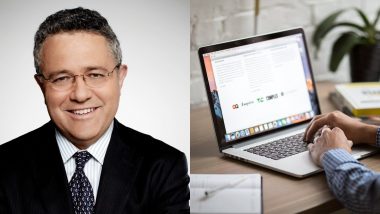 As the risk of COVID-19 continues across countries and people work from home, there seem to be an increase in online accidents or rather intentional ones over online meeting platforms. The New Yorker has suspended reporter Jeffrey Toobin for masturbating during a Zoom video call with members of the New Yorker and WNYC radio last week. Toobin served as a staff writer for the American magazine and as a chief legal analyst for CNN. Two people on the video call said that they saw the reporter exposing himself. An investigation has been initiated in the matter. As these kinds of cases increase, we bring to you a compilation of five such cases that went viral on social media platforms. Uh Oh! Husband Sneakily Draws a 'D*ck Pic' on Wife's Whiteboard Before Her Zoom Meeting, Funny Pic is Going Viral.

Nick Emery, CEO at an advertising firm Mindshare has been sacked for allegedly filming himself in the toilet as a prank during a Zoom call. A witness told the Sun that he 'filmed himself with his bottom out while having a wee'.  It was said that some people on the call took offence and complained to the senior staff at WPP that owns Mindshare. His interim replacement insisted that the behaviour was offensive and inappropriate and would not be tolerated. Emery had been with the business for more than 20 years.

Government Official Caught Having Sex With Secretary Over Zoom Call

In August, a government official in the Philippines was caught having sex with his secretary during a Zoom meeting. The Fatima Dos Village Council in Cavite was hosting a regular online business meeting when their boss, Jesus Estil, joined the call. Members of the meeting were scandalised to see him walking back to the room and engaging in sexual acts with a woman was later identified as his secretary. Reportedly, he had struggled to turn off the camera before walking away. He did not realise that his camera was still on and people on the call could see him. The video was shared on Facebook by Philippines journalist Erwin Tulfo two days ago, where it has since registered over 2 million views and led to calls for Mr Estil's suspension.

A businessman accidentally appeared naked during a Zoom call with Brazil President Jair Bolsonaro. The incident happened during a virtual meeting organised by Paulo Skaf, the president of the Federation of Industries of the State of Sao Paulo. The businessman apparently forgot to turn his camera off while taking a shower during the video call. A screengrab of the Zoom conference call was widely shared on social media platforms.

Video of a couple having sex during a Zoom call for for the Rio de Janeiro city council had gone viral on social media platforms. The incident happened during a call on how to guarantee food for students in the municipal system during the pandemic. The meeting was chaired by a member of the Socialism and Liberty Party, Leonel Brizola. The other councillors in the meeting ignored the scene and continued with the meeting. After the incident went viral, in a statement, Brizola said that the actual topic of the meeting was not highlighted in the media.

As virtual meetings have become a norm these days since the pandemic began, there is an increase in similar mishaps all over the world. Unfortunately, some have also costed people their jobs along with embarrassment.

(The above story first appeared on LatestLY on Oct 20, 2020 06:47 PM IST. For more news and updates on politics, world, sports, entertainment and lifestyle, log on to our website latestly.com).