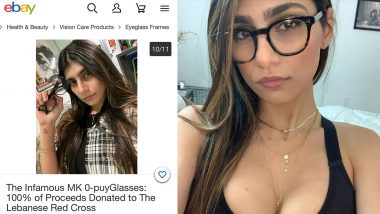 Recently the world has shaken with Lebanon's horrific blast where about 2,750 tonnes of ammonium nitrate stored in the Beirut port warehouse exploded on Tuesday, 04-08-2020. The blast devastated major parts of the Lebanese capital and while everyone is trying to help Lebanon in their own way, Mia Khalifa found a creative way to help her hometown. Mia Khalifa recently shared on Instagram that she will be putting her "infamous" glasses up for auction to raise money for the Lebanese Red Cross after the devastating Beirut explosion. Lebanon has been suffering due to conflict for a very long time and is currently in mourning after a massive explosion that killed over 100 and wounded thousands. Grandmother Plays ‘Auld Lang Syne’ Song on a Piano Surrounded by Debris from Beirut Explosion, Heart-Warming Viral Video Shows Preserving Spirit Amid Despair.

Mia explained how she hasn't done an auction before and wrote: "I’m just trying to get creative, there’s always more that can be done and this felt like a cheeky way to raise funds and make sure the conversation and attention doesn’t diverge from this crisis." Check out Mia Khalifa's complete post:

THE INFAMOUS MIA KHALIFA GLASSES - AUCTION. 100% of proceeds will benefit @lebaneseredcross and their tireless efforts in Beirut. I’ll be on IG live when the money clears to livestream the donation via wire transfer to LRC 🇱🇧♥️ I’ve never done an auction or used eBay before, hence the typo in the title from my dog walking across the keyboard, but please spread the word or bid, or donate to LRC. I’m just trying to get creative, there’s always more that can be done and this felt like a cheeky way to raise funds and make sure the conversation and attention doesn’t diverge from this crisis. Creeps are welcome, your money is just as green as ours! I’m putting the link in my bio for a few hours then changing it back to the Beirut Relief resources landing page. After that I’ll house the links/posts in a pinned memory for ready access. HAPPY BIDDING, YA FILTHY ANIMALS!

However, Mia Khalifa's post received a mixed reaction from Twitter and Instagram. But a lot of people lauded Khalifa for her creativity.  Someone wrote, "Mia Khalifa auctioning off her [explicit] glasses to raise money for Beirut is next level queen sh--."  "This isn't me doubting that people got this money, this just seems like people are putting in fake bids for this and im worried about the donation," another person commented their doubts. Later Mia Khalifa shared an update with her followers that eBay has reached out to her and that they were planning on relaunching the auction after it was taken down Friday and that she is also "working on other creative ways to raise funds in the meantime." View post:

(The above story first appeared on LatestLY on Aug 08, 2020 09:32 PM IST. For more news and updates on politics, world, sports, entertainment and lifestyle, log on to our website latestly.com).