Two photos of Prime Minister Narendra Modi greeting two different women are widely circulated on social media with a claim that he was "bowing" before Priti Adani, wife of Gautam Adani. Here's the truth. 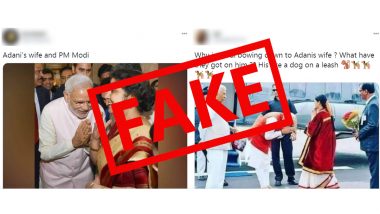 New Delhi, December 19: Two photos of Prime Minister Narendra Modi greeting two different women are widely circulated on social media with a claim that he was "bowing" before Priti Adani, wife of Gautam Adani who owns the Adani Group. The two images of PM Narendra Modi are shared to allege that his government is a pawn in the hands of billionaires. However, none of the women in the pictures is Gautam Adani's wife. Fake News of Reliance Industries Chairman Mukesh Ambani Suffering From Pancreatic Cancer And Undergoing Liver Transplant Goes Viral on Social Media, Here is a Fact Check.

One of the viral photos shows PM Modi greeting a woman in red and golden saree with folded hands. Sharing this photo, many wrote: "Look at this 56-inch person, bowing down before a 36-inch woman, removed his wife from his own house, and is worshipping Adani’s wife." However, the fact is the woman in the picture is not Priti Adani, but Deepika Mondol. Fact Check: Earth Will Not Go Dark for 6 Days in December 2020! NASA Calls It ‘Hoax Story’, Says False Report Circulating Since Last Decade.

Deepika Mondol is the chief functionary officer of an NGO called Divyajyoti Cultural Organisation and Social Welfare Society. Speaking to The Quint, Samar Mondol, husband of Deepika Mondol, confirmed that the woman seen in the viral image is his wife and is being misidentified Gautam Adani's wife.

The second viral photo shows PM Narendra Modi bowing with folded hands before a woman. The same claim that he was greeting Priti Adani is being shared with this picture. However, the truth is the woman in the viral image is former Tumkur mayor Geetha Rudresh. Prime Minister visited Tumkur to inaugurate the India Food Park in September 2014.

Why is Modi bowing down to Adanis wife ? What have they got on him ?? His like a dog on a leash 🐒🦮🦮🦮🦮 pic.twitter.com/ejN8PxH1tj

His official website has a detailed report of the event and footage in which PM Modi can be seen wearing the same clothes as in the viral image. Therefore, LatestLY can say with absolute certainty that none of the women in the viral photos is Gautam Adani's wife.

This claim is false. None of the two women in viral pictures is Gautam Adani\'s wife.

(The above story first appeared on LatestLY on Dec 19, 2020 12:48 PM IST. For more news and updates on politics, world, sports, entertainment and lifestyle, log on to our website latestly.com).