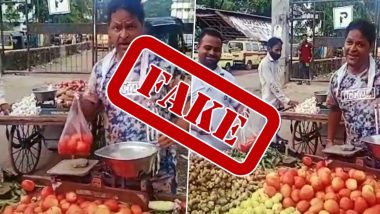 A few hours back, a video of actor Javed Hyder, who has been in the entertainment industry and has shared screen space with the likes of Sanjay Dutt and Aamir Khan, selling vegetables on the streets of Mumbai to augment his income owing to lack of work during the COVID-19 lockdown, went viral. What only made the video seem authentic was the fact that actress and television personality Dolly Bindra had shared the video on her social media profile. Aamir Khan’s Ghulam Co-Star Javed Hyder Is Earning His Livelihood Amid the COVID-19 Pandemic by Selling Vegetables? TikTok Video Goes Viral!.

However, after a thorough fact check, we have determined that the video was a mere TikTok that the actor made, with the intention to tell his followers that no job is big or small, superior or inferior. Hit by COVID-19 Lockdown, Small-time Actor Solanki Diwakar Returns to Selling Fruits to Earn a Living.

Check Out The Video That Dolly Bindra Shared on Her Social Media:

In fact, in a conversation with Mirror Online, Javed confirmed that he was not selling veggies on the streets. "No, I am not a vegetable vendor. I am an actor by profession even now. The entire selling vegetable video was just an act and I had made that TikTok only to motivate my followers that one should not give up when times are tough and that no work is small or big. I had no idea that it would go out with this message," Javed told the portal. Taapsee Pannu Complains About High Electricity Bill in June; Electricity Provider Responds.

Squashing all rumours of his financial stability, Javed further added, "By God's grace, I have enough to lead a normal life even if work doesn't resume for the next couple of months. And even if I have to sell vegetables for a living in future I have no qualms in doing it as that is also a normal job just like acting or anything else."

Javed also went on to reveal that he had even commented under Dolly Bindra's post and clarified that it was simply a motivational TikTok. "Dolly Bindra ji had shared the video on her social media handle stating that I'm selling vegetables now and I had even commented that it was only an act and nothing more, but I think people didn't notice it and the video went viral overnight," concluded Javed Hyder.

(The above story first appeared on LatestLY on Jun 29, 2020 10:51 PM IST. For more news and updates on politics, world, sports, entertainment and lifestyle, log on to our website latestly.com).