Aamir Khan’s Ghulam co-star Javed Hyder is selling vegetables to survive amid the deadly Coronavirus pandemic. Check it out. 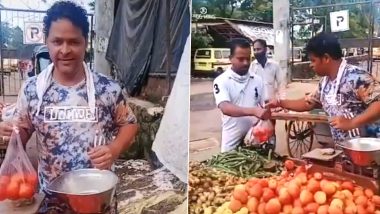 The novel coronavirus has led to chaos in the lives of many. Even the always booming entertainment industry could not fight the deadly bug and has suffered a huge financial loss. This in a way has left no or less work in the industry, which has made the survival of artists difficult and how. Talking on the same lines, a video of Aamir Khan's 'Ghulam' film co-star, Javed Hyder has gone viral on the web. In the clip, the actor can be seen selling vegetables amid the crisis. Javed's TikTok video has gone viral on social media in which he can be seen as a vegetable vendor. Chef Vikas Khanna’s Reply to Journalist Saying 'Sense of Hunger Came From New York, Not India' Impresses Twitterati (Watch Video).

It was Bigg Boss fame Dolly Bindra who shared the clip on Twitter claiming that it's due to financial woe, Javed is selling vegetables on the streets. In the video, Javed can be seen singing to ‘Duniya Mein Rehna Hai’melody while selling veggies to a customer. “He is an actor aaj woh sabzi bech raha hain,” Dolly captioned the video. In another tweet, Bindra also revealed how “Javed was associated with the movie ‘Baabarr’ (2009), and TV series ‘Jeannie Aur Juju’ (2012). His 2017 release includes the Hindi drama film ‘Life Ki Aisi Ki Taisi.” Amul Ad on Cancelled Class 10 Exams go Viral: Trending Topics, Viral Videos & Funny Memes of The Day.

Well, while the visuals do see Hyder turning into a vegetable seller, we do not know how true it is that he is going under some financial crisis. He might also be making videos for the sake of entertainment. Currently, Hyder has 99k followers on TikTok. Stay tuned!

(The above story first appeared on LatestLY on Jun 29, 2020 09:40 AM IST. For more news and updates on politics, world, sports, entertainment and lifestyle, log on to our website latestly.com).