From Dogecoin to Charcuterie, Here Are Most-Searched 'How to Pronounce' Terms Past Month, Learn The Pronunciation With These Videos

While to err is human, accurate enunciation does help to shut up the person constantly correcting your words. So if you've ever found yourself mispronouncing a certain word, this article will aid you in your plight, Here's how you pronounce a few words. 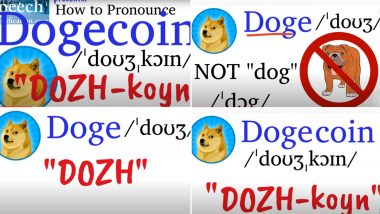 How to Pronounce Doge and Dogecoin

Ever find yourself stumped for words in the middle of a repartee? Where the words are seamlessly making rounds around the room with the charcuterie tray, but suddenly there's a lull because you find yourself in an embarrassing spot where the pronunciation of a certain word - like charcuterie - eludes your word pallet; So then you quickly retreat and bow out of the conversation, lest you be discovered for your pronunciation shortcomings. While mispronouncing is human, accurate enunciation does help to shut up the person constantly correcting your words. So if you've ever found yourself mispronouncing a certain word, this article will aid you in your plight, Here's how you pronounce a few words.

While some often pronounce the first syllable like “dog” or “doggy, ” it's incorrect. According to the cryptocurrency’s co-founder, Billy Markus, the correct pronunciation is “dohj coin.”

People often disagree about the way to pronounce 'Acai" - Some prefer saying "ah-sigh-ee," "ah-sai," while others "ah-kai." According to the National Center for Complementary and Integrative Health, you should pronounce açaí as in "AH-sigh-EE."

A gyro is a Greek sandwich of lamb, veggies, and tzatziki sauce. If you've ever found yourself in the middle of a heated pronunciation debate while ordering lunch, this should help to put it to bed and just enjoy your sandwich. Gyro is pronounced as "yee-roh" or "zhihr-oh."

Quinoa, a seed extremely popular among health freaks is often subjected to mispronunciation. According to Merriam-Webster Dictionary, Quinoa is properly pronounced as "KEEN-wah." Don't believe us? Well, hear it for yourself.

A platter of cold meats including sausages and hams, cured meats, it's pronounced as “shar - koo - tuh - ree” in English and “shar - koo - tree” in french. So when in France, you know what to do.

(The above story first appeared on LatestLY on Jun 11, 2021 05:20 PM IST. For more news and updates on politics, world, sports, entertainment and lifestyle, log on to our website latestly.com).