From Non Binary to 444, Here Are Most-Searched 'What Does...Mean?' Phrases in US Past Month, Know Their Meanings

In old age, people refused to believe in anything incongruous that didn't fit their comfortable, rigid perceptions of traditional norms, but now people are more open to explore the fluidity of genders and are quite often searching for answers to better educate themselves about their meaning. From Non-Binary to 444, here are the most-searched phrases in the US. 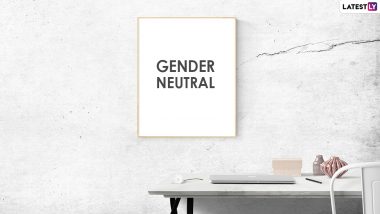 If you haven't been time-travelling through the stone age, you might have heard of LGBTQIA - an acronym to describe people who don't identify themselves in the traditional gender norms i.e male, female. Or the word SMH that has risen out of the millennials lexicon and baffled the older generations. Did you know, besides the heterosexual male/ females gender, there is a whole spectrum where people congregate and base their identity beyond the archaic definition of traditional genders; Case in point - Non- Binary and Pansexual folks. While these people on the spectrum have faced categorical discrimination throughout history, the recent boom in celebrities breaking out of the traditional gender norm has inspired conversations and questions regarding the inception and meaning of these genders. From Woke to Cisgender, Here Are Most-Searched Definitions Past Month in US, What Do They Mean?

In old age (translation a decade ago), people refused to believe in anything incongruous that didn't fit their comfortable, rigid perceptions of traditional norms, but now people are more open to explore the fluidity of genders or eccentric phrases and are quite often searching for answers to better educate themselves about their meaning. From Non-Binary to 444, here are the most-searched phrases in the US.

What does Non-Binary mean?

Society tends to recognize just two genders, male and female. The idea that there are only two genders can be categorised as “gender binary,” Binary means two parts - male and female.  Ergo, “non-binary” is a term people use to describe genders that don’t fall into one of these two categories, male or female. According to the Human rights Campaign, "Nonbinary refers to someone who does not identify only as a man or a woman, i.e. the traditional gender binary." Pansexual, Demisexual, Autosexual or Gynosexual, Were you Aware About These New Sexual Orientations.

What does SMH mean?

SMH is an acronym, that is abbreviated as Shaking My Head. It's a slang word mostly used in texts as a way to convey disapproval or bafflement without actually acting or spelling it out.

What does pansexual mean?

Pansexual is a word used to describe folks who are attracted to other folks regardless of their genre. They are basically attracted to everyone and they are not confined by heterosexual gender norms. The prefix pan translates to all in the Greek language.

What does Baka mean?

Baka is a deprecating word of Japanese origin. It men's stupid or foolish. It is now used by people as slang to describe someone who is being deliberately obtuse or just as an average insult you hurl at someone you perceive as being stupid or foolish.

The number 444 is perceived as divine digits often described as angel numbers. If you believe the number has suddenly become a ubiquitous fixture in your life, and stumble upon it wherever you go, it means that you are in the righteous path and the angels are looking out for you. Many believe the number translates to words like honesty, health, determination, success and confidence

(The above story first appeared on LatestLY on Jun 11, 2021 04:00 PM IST. For more news and updates on politics, world, sports, entertainment and lifestyle, log on to our website latestly.com).