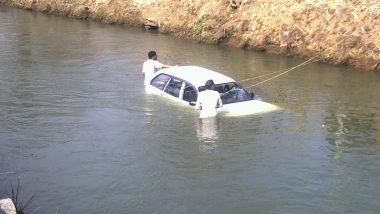 According to The New Indian Express, the incident took place when Dr Soniya, her three-month-old daughter, mother Sosamma, and relative Anish were travelling to Kumbanad in Kerala. Shocking! Florida Man Filming Sunrise Over Atlantic Ocean Gets Killed After Sand Dune Collapses on Top of Him

Kottayam West police said in a statement, “they were travelling with the help of Google Maps. When their car was moving through the Thiruvathukkal- Nattakom Cement junction bypass, they lost way and the vehicle plunged into a waterlogged area at Parachal.”

When the family reached a canal near Parachal, Google Maps recommended driving straight. The driver, without noticing the curve of the road, drove straight ahead and fell into the water. However, the passengers were rescued by the locals before they could drown as the locals immediately swung into action. Bride and Groom Get Into ‘Action’ Right at the Mandap and It’s Not What You Are Thinking! Viral Video Will Give You Second-Hand Embarrassment

According to an eyewitness, Sathyan K, when they had reached the place, the car was freely drifting downwards. The front portion of the car had almost submerged in water. A lorry was later used to pull the vehicle out. The family called relatives for help who picked them up.

(The above story first appeared on LatestLY on Aug 10, 2022 09:00 AM IST. For more news and updates on politics, world, sports, entertainment and lifestyle, log on to our website latestly.com).