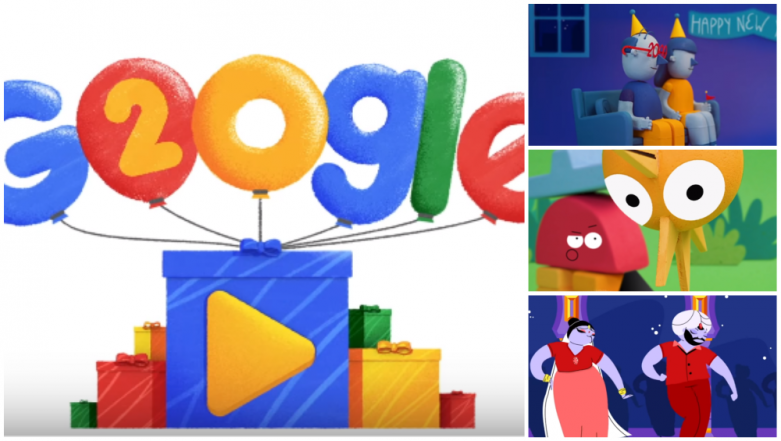 Everyone's favourite search engine Google turns 20 today. Google began as a research project for two PhD students Larry Page and Sergey Brin in 1996. The two registered the domain name for it in September 1997. And in 1998, the two finally set the foundation stone for what went on to become the biggest search engine in the world. It's hard to imagine a life without Google, especially for millennials and post-millennials who turn to it for everything from looking for the perfect pizza place to finding answers to life's most vexing questions. Google knows how much you depend on it. In a birthday doodle dedicated to itself, Google features19 popular questions asked by netizens from all across the world in the last 20 years. Here's a complete list.

Google starts the list with the vintage version of the search engine looking for the answer to 'What is Google?' With over two decades of internet dependence, we already know the answer to that!

Remember the hysteria around the new millennium? There were many theories about Y2K but the most popular one was that the world would end. Luckily, no such thing happened and here we are close to 20 years later, still thriving.

Let's be honest. Most of us are still all thumbs when it comes to tying a tie! But whom do we turn to before an important job interview? That's right! Good old Google to the rescue!

To answer your question, it is soccer! Cricket lovers need not despair because the gentleman's game comes second in the list of the most famous sports in the world. Field hockey comes third.

The Human Genome Project is an ambitious long-term global project that started in 1990. The objective was to identify and map the 30,000 genes in the human DNA. The results of the project were finally published in 2003.

The year 2004 was a leap year. In every four years, February 29 is added as a corrective measure to the Gregorian since the earth doesn't take exactly 365 days to travel around the sun.

As much as our heart goes out to those with two left feet, but turning to the internet to teach you how to dance? We've really arrived as a species.

Possibly the biggest heartbreak story in the history of astrophysics was ousting poor lil Pluto out of the planetary league. In 2006, the planet was reclassified as a dwarf planet. It's OK Pluto, you will always be a planet for us.

If there's one thing, the internet hasn't had enough of, it's cats! Neko is Japanese for cat, and Neko Nabe is pictures of cats chilling inside pots and pans.

The largest machine in the world, the Large Hadron Collider is also the most powerful particle collide build by CERN. It's a giant circular tunnel built in 2008 used in the study of elementary particles.

How do you impress your significant other with little effort? Tell them "I Love You" in a language they don't understand. 'Translate love' was probably the most-popular query of 2009.

Auto-Tune is an audio processor that has been making talentless pop stars sound pitch perfect by correcting all their wrong notes and pitches.

On 29th April 2011, the Royal Wedding of Prince William and Kate Middleton sent us into a meltdown. Quite naturally, we know why the 'Royal Wedding' was the most popular searches of 2011.

It sure feels silly thinking of ourselves freaking out on the eve of New Year 2012, worried that the world may end in a few hours. Those Mayans sure played a nasty prank on us.

There's no bigger authority in this matter than the one who invented GIF in the first place. And he says it should be pronounced the way 99 percent of the population has been -- with a soft G or 'jif.' That settles the debate!

At this point, this is pretty much a redundant question. Selfie also won the Oxford Dictionaries Word of the Year award in 2013.

In the age of Instagrammable food, only one food reigns supreme, avocado toast. Loved by vegans, vegetarians, carnivores, weight watchers and foodies alike, the toast is a humble mash of an avocado flesh spread on a toast.

Summer Games is another term for the Summer Olympic. In 2016, netizens frantically googled the date of the much-anticipated Rio Olympics.

Show us a better way to unwind at the end of the day! Nothing gives us more joy than watching animals on the internet. We have apparently had enough of humans.

Time sure flies. Google is already two decades old and has been saving our lives every day. But we may not say it often Google, but Thank You!