The statues—Jaish-e-Mohammed leader, Masood Azhar and online PUBG are placed at two different pyres in Worli for tonight’s bonfire. 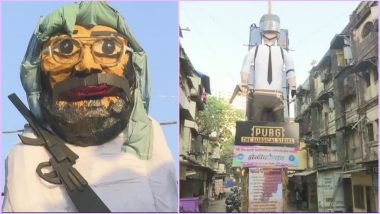 Holika Dahan also known as “Choti Holi” is an important festival of the Hindu community in India, which is celebrated a day before the festival of colours—Holi 2019. Before we begin the main festivity, March 20, this year marks Holika Dahan, commemorating the death of the demoness called, “Holika”. Upholding the significance of the day, two effigies are placed in Mumbai, which is set to ablaze on Holika Dahan, marking the triumph of good over evil. The statues—Jaish-e-Mohammed leader, Masood Azhar and online PUBG are placed at two different pyres in Worli for tonight’s bonfire. Know Shubh Muhurat and Puja Vidhi of Chhoti Holi.

In February, India has undergone a terrifying terror attack in Pulwama district, Jammu and Kashmir, where the nation lost 40 Central Reserve Police Force (CRPF) jawans. The attacker reportedly was a member of Jaish-e-Mohammad. Again, infamous online game, PUBG was headlined recently, with youngsters so much engrossed into it that they often affect their health. A lot of disheartening events occurred recently, and people continue to unite for a peaceful nation. WhatsApp Stickers, GIFs, Images, Quotes and Messages to Send Colourful Happy Holi Wishes.

Mumbai: 'Holika Dahan' effigy of Jaish-e-Mohammed's Masood Azhar and an effigy depicting PUBG, in Worli, ahead of #Holi . pic.twitter.com/UINHOchp9C

PUBG is one of the most popular mobile games in India and other parts across the world. And at the same time, the increasing popularity of the game has led to protest from parents complaining about the children addiction towards it. The game was banned in Rajkot, Gujarat, and those found playing could be arrested. On the other hand, where the Indian militants claimed that it had destroyed, Jaish-e-Mohammed terrorist training camp in Balakot, Pakistan, regular lives in Jammu and Kashmir is largely affected.

(The above story first appeared on LatestLY on Mar 20, 2019 10:01 AM IST. For more news and updates on politics, world, sports, entertainment and lifestyle, log on to our website latestly.com).